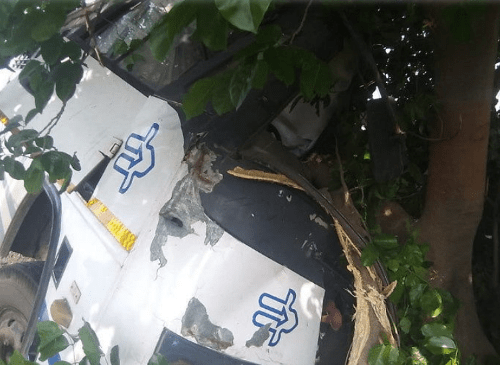 An accident took place on NH-113 between Pratapgarh and Chittorgarh. 1 died, 10 got injured out of which 4 critically injured were referred to Udaipur. The accident occurred on Thursday afternoon when a roadways bus going from Banswara to Chittorgarh lost control, went down the road and rammed into a tree. The bus hit the tree with such a severe impact that one of the tree branches broke into the bus injuring 10 and killing one.

The roadways bus was at a bridge when the driver heard the sound of something breaking. The sound distracted him to such an extent that he lost control over the bus and the bus speedily went down the road. One of the passengers died on the spot while 10 got injured. 4 passengers were in critical condition hence they were rushed to MB Hospital, Udaipur. The other 6 were rushed to Pratapgarh hospital.