NHAI has cancelled the tender for elevated road project in udaipur. traffic situation to be resolved in some other manner. 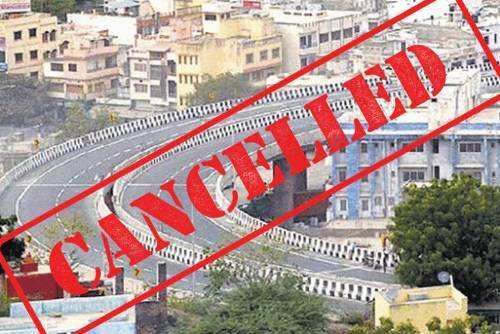 National Highways Authority of India (NHAI) has repealed the tender that was floated for the elevtated road in Udaipur – from Court Chauraha to Udaipol.

In 2016, the Rs 136 Crore project was approved by the State Government and NHAI was asked to execute the project  by means of its regular tendering process, and NHAI had processed the tender.

However, a public interest litigation , followed by appointment of consultants by the NHAI to look into the project feasibility even after the State Government had given approval, subsequent intervention by the court recently and finally questioning on the feasibility reports by the CRRI to NHAI, resulted in the NHAI cancelling the tender and the project.  There will no longer be an elevated road in the congested areas of the city.

Hearing the Public Interest Litigation (PIL), Rajasthan High Court had put an interim stop on proposed elevated road in Udaipur. The High Court has issued a notice to National Highway Authority of India, Collector of Udaipur and others in this regard.

Two member bench of Chief Justice, Rajasthan High Court, Pradeep Nandrjog along with Justice Vineet Mathur head the PIL and issued a notice to NHAI, PWD, Udaipur Collector and others seeking a response till 30-July 2018.

The High Court had directed the CRRI to review the project and CRRI had asked NHAI to submit the report, following which NHAI cancelled the entire project and the tender that was issued.

This was the proposed project and the problems accompanying it:

The Public Interest Litigation was filed by Om Prakash Khatri, JS Dave and Udaipur Citizen Society and others. Representing the applicants, Senior advocate M S Singhvi, Sanjay Mathur and Akhilesh Rajpurohit said that regulations and provisions related to road crossing have been overlooked in the proposed flyover at Udiapole and the elevated road. They also alleged that the design of the proposed flyover has technical faults and raises severe issues related to public security.

Finally, the High Court has also, in its order said that the elevated road project, if it ever comes up in future, will take into cognizance the current decision by High Court and NHAI and will seek approval from the High Court before proceeding.