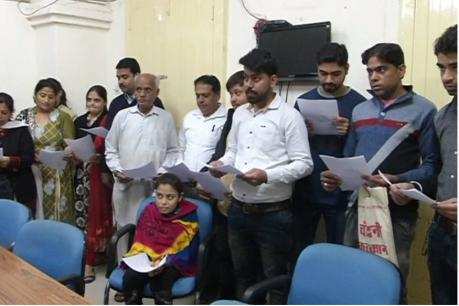 Over the last couple of months, Udaipur has been at the forefront of National news that pertains to Pakistani nationals being granted Indian citizenship.

Digging out the details, the Rajasthan Sindhi Academy, under the chair of Harish Rajani of Udaipur has been at the helm of the entire exercise and effort that has led to the minorities of Pakistan being granted Indian citizenship as per the provisions of the Indian Citizenship Act, 1955.

The efforts date back to more than a decade ago, when the migrants from Pakistan came to India on LTV (Long Term Visa), for work and residence, leaving behind all their assets, movable and immovable in Pakistan.

Their intent being to seek and secure Indian Citizenship, as per applicable norms and procedures as set out in the Act. The migrants were conducting their businesses and maintaining their families in Udaipur with an intent to reside permanently in India and become citizens of India.

Further to their completing all the procedure set forth in the regulations, and having obtained the prescribed verifications and enquiries at the district level by competent authorities, the Rajasthan Sindhi Academy stepped in and put forth their requests in October 2017 to the Prime Ministers Office as well as to the Union Home Ministry. 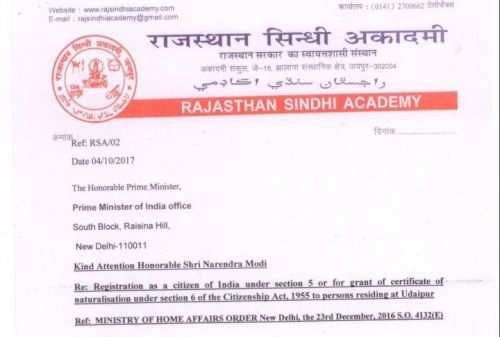 On getting approval from the higher authorities, the Rajasthan government pursued the process of granting the migrants citizenship status, as their Pakistan Passports have long expired and they have maintained LTV for more than a decade now. 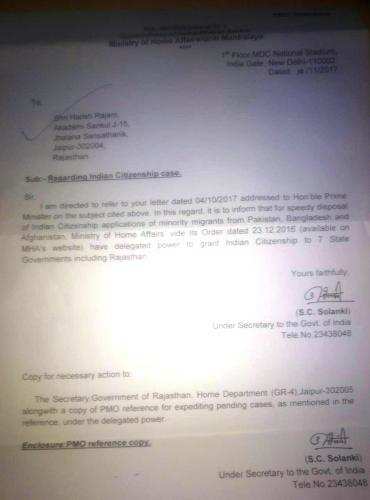 What are the provisions of the Indian Citizenship Act

In exercise of powers conferred by Sec 16 of the Citizenship Act 1955 (57 of 1955), the Central Government hereby directs that powers exercisable by it, for registration as a citizen of India under Section 5 or for grant of Certificate of Naturalisation under Sec 6 of the Citizenship Act, 1955, in respect of any person belonging to the minority community in Afghanistan, Bangladesh and Pakistan, namely Hindu, Sikh, Buddhist, Jains, Parsis and Christians residing in the states of Chhattisgarh, Gujaray, Madhya Pradesh, Maharashtra, Rajasthan, Uttar Pradesh and in the Union territory of Delhi.

Nearly 100 individuals of Pakistan origin have been granted Indian Citizenship in the last couple of months since this endeavor of the Rajasthan Sindhi Academy.