With the new report of CAG on NREGA which talks about what we all already knew - 'improper use of funds', 'presence of many ghost worker', 'only 30% completion of tasks' etc, it is again evident that our level of corruptness has reached unfathomable depths. 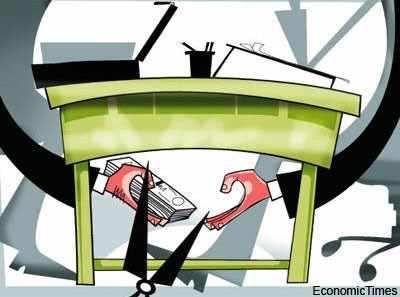 With the new report of CAG on NREGA which talks about what we all already knew – ‘improper use of funds’, ‘presence of many ghost worker’, ‘only 30% completion of tasks’ etc, it is again evident that our level of corruptness has reached unfathomable depths.

During the last assembly election season in Tamil Nadu, I heard the stories from some of my colleagues, who hailed from nearby districts of Chennai, about how every house in their area received cash ranging from Rs. 5000 to Rs. 10,000 stapled along with the newspapers in the morning as a gift from political parties. Election Commission seized around Rs. 60 crore during this period in 2011 from Tamil Nadu and called it ‘just the tip of the iceberg’.

I do not even want to mention the insights, about the nexus of politics and money, given by a friend who belongs to a respected political family in Uttar Pradesh. It is beyond the imagination; in his words “That’s UP!”

PPP (Public Private Partnership) in the corruption of business or in the business of corruption is also not new. Latest ‘Partnership’ coming to light being the multi-crore Chit-Fund scam in Kolkata.

Even more difficult to understand is the fact that even after so much corruption, how has our country been growing at one of the highest growth rates in the world for past 10-15 years?

I am neither an economist nor an analyst but I tried to understand the growth story of India. Among many positives, I could relate India’s growth with illegal and black money too. I might be grossly incorrect with my theory but one cannot deny that corruption also impacts numerically identified statistical GDP growth rate, sometimes positively.

Consider this, direct and indirect tax paid by the salaried and the businesses are used for public schemes such as NREGA. A huge sum of money meant for poor workers through such schemes goes to a special class of corrupt government officials and other bahubalis who spend it lavishly in purchasing industrial products – high end phones, luxury items, SUVs (NREGA could be the reason for the huge sales of Bolero in rural areas as suggested by an article in yesterday’s Economic Times) etc – which in turns drives industrial growth and hence GDP growth rate.

Had the NREGA spending been done properly, that means if the money had gone to the poor workers then they would probably have spent it in having good food or buying cattle or fulfilling some other basic needs. But this couldn’t have driven growth numbers, could it? It could have in the long term, but not soon.

Another case. There have been cases about not-so-rich looking people coming with bag full cash to buy BMWs and Mercs in the showrooms in NCR. Many newspapers ran stories of nouveau riche, who made fortunes by selling their agricultural land to the industries. Many of those Crorepatis (and even Arabpatis) formed groups; they acquire lands of small farmers illegally or forcefully by paying them meager sums and sell them at prices lower than what would have been received by the real land owners.

If the land owners were given their due sums then probably businesses would have to negotiate and shell out money to more number of small land owners. This would have been time consuming and resulted in less profitable project for the businesses; and the land mafia which employees many goons who in-turn spend money with an ultimate rule that ‘illegal money is never saved nor spent wisely’, would not have spent unwisely.

The genuine land owners would probably have spend it moderately or would have invested in what India considers the safest bet in terms of investment, gold; ending up with increasing Current Account Deficit (CAD) even more.

Third one. We all know that builders in almost all the big cities ask for 50 percent of payment in cash (read black money) for selling a flat and thus, pocket large amount of taxes.

This is additional profit to what they already earn. Now, they either invest it in their next project (helping in infrastructural growth) or enjoy lavishly with the illicit wealth (helping in industrial growth) or stash it in one of the tax heavens (which would be brought back and spent by the owners themselves when it is needed the most i.e. in the time of crisis; Thus, helping a bit towards growth in bad times).

I have not given an exhaustive study nor have I considered the history, numbers, psychological and regional differences. I have just tried pointing out what could be possible.

Corruption knows no limits. In all the cases mentioned above, we are talking about involvement of millions of people and some thousand crores of money which can easily impact economic growth.

Yes I know about many other important factors that boost growth and all the social and financial losses that are incurred due to the cancerous vice but can one deny that corruption is not one of the aspects of movement in GDP rate?

I am, by no means, trying to point out the positive side of corruption. Real Growth of a country is very important and unchecked immorality of corruption and greed might help move the numbers that identify growth up or down in short term.

But in the long term, stark differences in the financial health of various sections of the society can take the whole nation down to the dark abyss of unprecedented slowdown and social devastation. India does not need high growth rate but a decent collective growth with a healthy society.