Devi is worshipped in different contexts at different places. Her various forms, such as Navdurga, Shakti, Chamunda and Vishnupriya are commonly worshipped in Udaipur. About their origin, there is an interesting story. 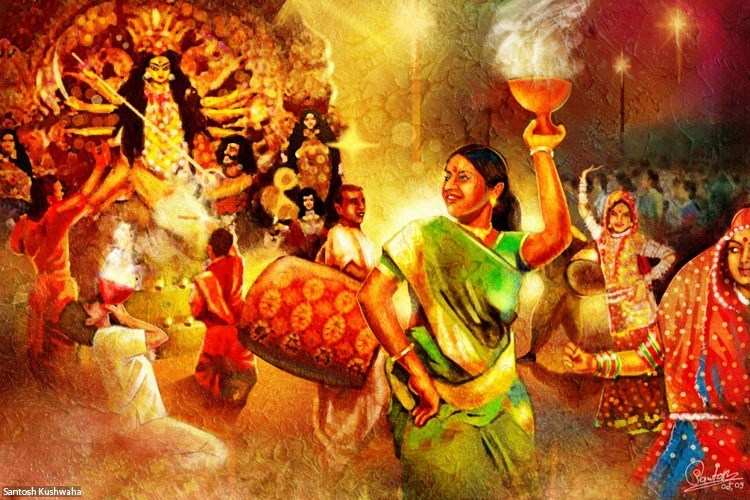 Devi is worshipped in different contexts at different places. Her various forms, such as Navdurga, Shakti, Chamunda and Vishnupriya are commonly worshipped in Udaipur.  About their origin, there is an interesting story.

Shiva was not invited by Daksha Prajapati to the yagna the latter was performing.  Sati asked Shiva’s permission to go to her father’s yagna but Shiva did not allow her to do so.  Sati was determined to go there, she said, she would go there and get the ‘ahuti’ in his name and if it was not done, she would destroy the yagna.

Her eyes became red, her lips began to tremble and due to rage her body began to glow with a unique light, like fire.  Her hair was disheveled. She wore a garland of skulls and her tongue was jutting out.

The first of the ten Mahavidyas is Kali who was dark complexion as she is related to “pralaya”. Standing on a corpse, she denotes that a universe without shakti is lifeless.  She has a frightful look as she is the destroyer of the ego of the weak. Her four arms symbolize perfection. She is in Abhay Mudra as she herself is fearless and also grants this virtue to the devotees who seek her refuge.

The garland of skulls on her neck shows that man is mortal and she is the only support of the dead. She survives when everything vanishes in “pralaya”. 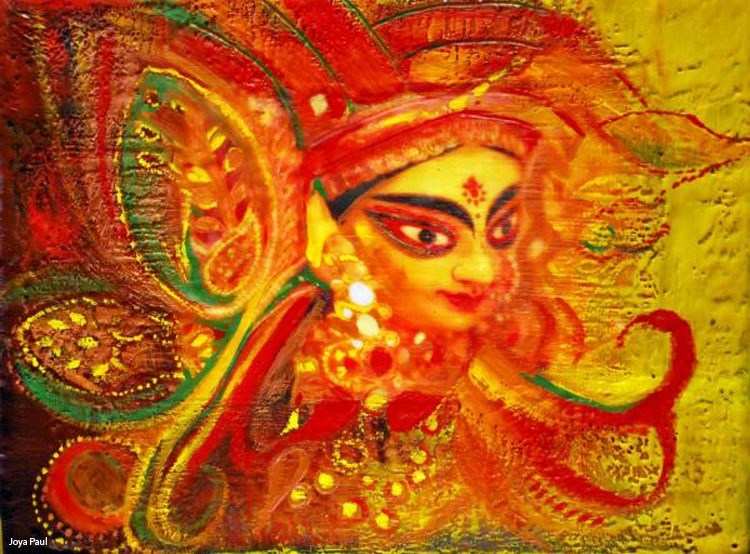 Kamla is the power of Vishnu, her worship as the consort of Vishnu is in fact the worship of the power that sustains the universe. Without her grace one cannot have prosperity. Her grace is needed by men, demons and Gods, “sidhhas” and “gandharva”. She has been worshipped since time immemorial. She is one of the ten ‘mahaviyas’ and her devotees are perfect.

Vagla is the Devi’s third form, once in Satyuga there was a devastating storm. This threat to the survival of humanity worried Vishnu who went to Hardika Lake in Saurashtra and prayed to Bhagwati. Shrividya emerged out of the lake dressed in yellow clothes and controlled the storm. Vagla has the power to give everything to her devotees and is like a wish filling tree.

For killing Hragir, Devi got Neel Vigraha. She is seen standing on the corpse-like body of Shiva. Her blue body is like ‘neelkamal’

She has three eyes and she holds Scissors, Kapal, Lotus and Khadag in her hands. Dressed in deer skin, she wears a necklace made of human skulls. She has a great compassion for her devotees.

About the origin of Chichinamasta, there is also an interesting story. Once, Bhagwati Bhawani went to bathe in river Mandakini with her friends Jaya and Vidya, due to hunger her complexion became dark, her friends asked her for food. Devi asked them to wait for a while and after a long wait, they told her that mothers provide food to their children instantly.

Out of her compassion, she cut off her head which fell and rested in her left hand. Three streams began to come out of the head, two in the direction of the ladies and the third one rose up and Devi fed herself with it. From that time she is being called Chichinamasta.

Shiva’s name is Matand and his shakti is Matangi. Her complexion is dark and she has half moon on her head. This three-eye goddess has a glow like blue lotus. She holds pash, khadag, ketak and ankush in her front hands. A destroyer of the demons, she fulfills all the desires of her devotees.

On another occasion, Parvati got very hungry and asked Shiva for food. When she did not listen to her many demands, she swallowed Shiva. ‘Dhoomrashi’ emerged from her body. Shiva told her that from that time her beautiful body would be called Dhoomwati. This form is old in age and looks frightening and this extremely famine figure appears to be very hungry.

Tripursundari is a Tripur form of Shiva, it is the only with her help that Shiva appears in the smallest and biggest forms. She rides in a chariot.

Once Kali thought of becoming fair again, so she vanished and at that time Narad appeared there. When Shiva asked him about the whereabouts of Kali, he was told that she was there in the north of Sumeru Mountain.

Narad went to her and conveyed to her Shiva’s proposal to marry her. She was enraged and out of her emerged a beautiful young girl Tripurbhairavi.

Primordial Bhagwati Bhuvneshwari is the partner of Shiva’s all playful activities. She is strength of all and nourishes everybody. Her form is gentle and she makes her devotees fearless and gives them all ‘Siddhis’.