ost operation Blue Star, I served for three years in Punjab but was deprived of extensively touring the state as the commuting was restricted and risky due to terrorism and unrest. After nearly three decades (28 years) of leaving Punjab, I booked my tickets for Amritsar last month, to visit holy Harmandir Sahib Gurdwara, Akal Takht, Taran Taaran and Anandpur Sahib. 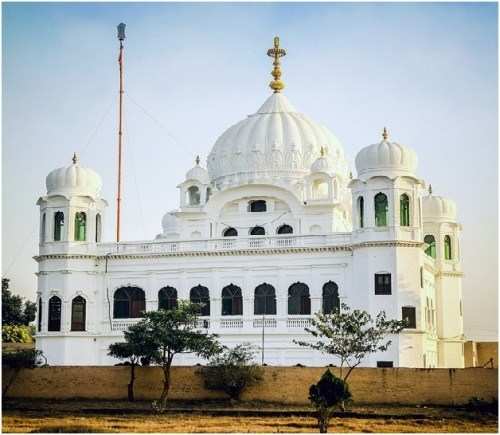 Post operation Blue Star, I served for three years in Punjab but was deprived of extensively touring the state as the commuting was restricted and risky due to terrorism and unrest. After nearly three decades (28 years) of leaving Punjab, I booked my tickets for Amritsar last month, to visit holy Harmandir Sahib Gurdwara, Akal Takht, Taran Taaran and Anandpur Sahib.

There was relentless debate on the controversial visit of cricketer turned politician and Punjab Deputy Chief Minister Navjot Singh Sidhu. In the recent Pakistan general elections there was a change of government and cricketer turned politician Imran Khan was elected new head of the government in Pakistan. However, there have been allegations that he became head of the country, courtesy Pakistan army.  It has been observed time and again that no civilian government in that country can survive without the blessings of Army.  In his swearing in ceremony three former cricketers from India namely Sunil Gavaskar, Kapil Dev and Navjot Singh Sidhu were invited by Islamabad.  Gavaskar and Kapil Dev avoided the visit due to other commitments and could be for the reason that India-Pakistan relations are at an ebb in recent times.  However, Deputy Chief Minister of Punjab Navjot Singh Sidhu attended the swearing-in-ceremony of Imran Khan in Islamabad.

His presence in Pakistan turned into a row following his act of hugging the Pak army chief General Bajwa. His act has been criticized in a big way. Sidhu’s explanation was that he was pleased to hear from Pak General that Pakistan is going to open Indo-Pak border at Dera Baba Nanak in Gurudaspur to pave way for Sikh pilgrimage on the occasion of 550th Birth anniversary of first Sikh Padshah Baba Nanak Devji and in this moment of joy he hugged the General. 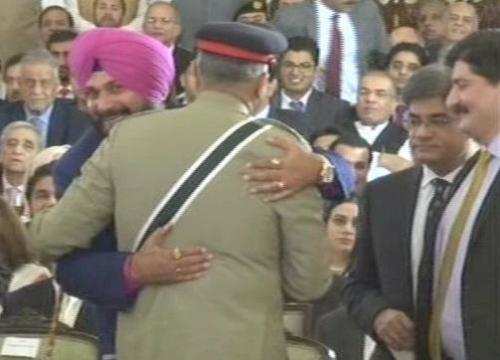 Sidhu faced massive opposition after he returned home from Khan’s swearing-in ceremony in Islamabad. His act of hugging surprised everyone. As regard opening of passage for Holy darshan of Kartarpur Sahib similar offers were made by Pakistan in past but the promises did not materialise, probably due to a hidden agenda behind such a move of promoting and supporting intruders with an aim to cause unrest in India. The Mumbai terror attack, attack on Pathankot airbase and continued support to extremists in Kashmir are known worldwide. Sidhu on return to India moved an open letter to the Union minister Sushma Swaraj in which the cricketer-turned-politician said: “Now an opportunity has knocked on our doors. Pakistan has shown a positive intent towards the long-pending demand of the Kartarpur Sahib corridor. Pilgrims and we all have been demanding this corridor for years.”

Sidhu added that there are some positive moves on this issue when he visited Pakistan to attend the Prime Minister of Pakistan Imran Khan’s oath-taking ceremony. Later, there was a news that Pakistan’s Information Minister Fawad Chaudhary said that the corridor will be opened and even the requirement of visa won’t be required as part of the 550th  birth anniversary celebrations of Guru Nanak Devji, it is time for India to take a positive step on this highly emotional issue. 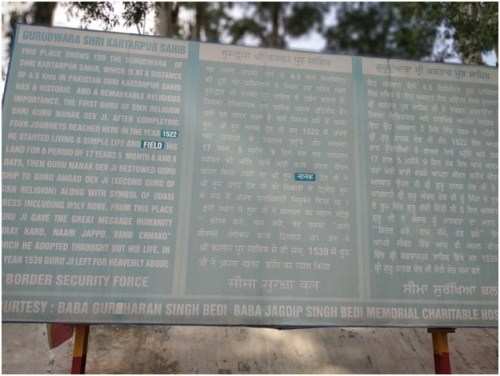 It is believed that Baba Nanak Devji tours included most of South Asia, Tibet and Middle East including Mecca and Baghdad.  Guru believed to have left his home at the age of 27 and remained away in all for 31 long years. His journeys in Sikhism is termed UDASIS.  After his long journeys at the age of 53 here in Dera Babab Nanak village he lived for 17 years.  The Guru breathed his last on 22 September 1539 at the age of 70 years in the village Pakhoke (now known as Kartarpur Sahib), which is located in Pakistan. A Gurudwara was built in commemoration of the late guru at Pakhoke and the same is named as Kartarpur Sahib. 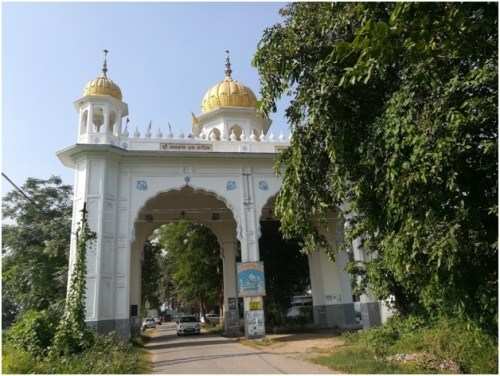 The distance between Kartarpur Sahib and the Indo-Pak border is just four and half kilometers. Some two and half kilometers away from international border, river Ravi is flowing. The river cannot be seen from the border as there is vast greenery on the river banks. However, on the other side of river some glimpses of the top of Gurudwara can be seen with naked eyes and with binoculars top portion of the Gurudwara can be seen very clearly, if the sky is clear. 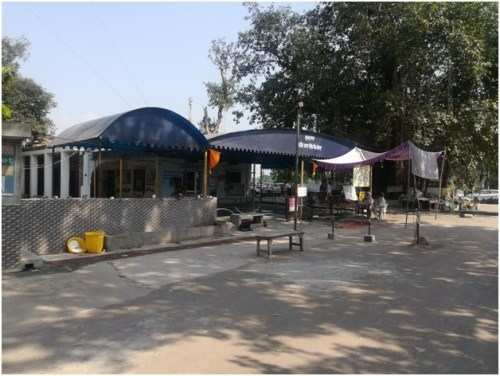 The village Dera Baba Nanak and Kartarpur sahib has great significance and esteemed in Sikh religion. In Dera Baba Nanak, which is just around 50 kilometers from Amritsar there are three famous Gurudwaras, they are Sri Darbar Sahib, Sri Chola Sahib and Tahli Sahib (Gurudwara Baba Sri chand ji – Son of Guru Nanak Dev). At present in Gurudwara Darbar Sahib Kar-Seva is going on. One of the hall being built in Darbar Sahib is named after Bhai Mardana a Muslim follower of Nanak Devji. In Gurudwara  Chola Sahib costume used by Baba Nanak Devji is preserved and show cased for holy darshan of devotees. Baba hailed from the Bedi clan, thus this Gurudwara is being run by the Bedi family.

However, one of the most sacred places of the Sikh Panth, Gurudwara Kartarpur Sahib is situated on the banks of river Ravi, which is in Pakistan. Just four and half kilometers from the international border – so near yet so far. 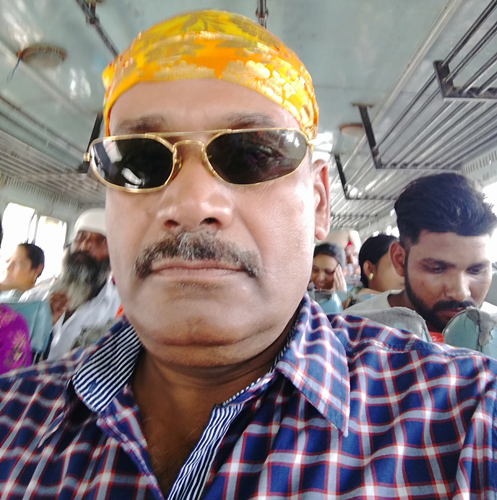 I traveled in a bus from Amritsar to Dera Baba Nanak via Ajnala. After alighting at Dera Baba Nanak, one local who was a co-passenger in the bus helped us in hiring an auto rickshaw for our onward journey to the Indo-Pak border. There is a BSF check post on the border. A huge entry gate is there just before the BSF check post and a small Gurudwara with the usual langar and refreshment for visitors.  Just before the fencing of border, there is a platform erected to climb up and reach the binoculars installed there. Unfortunately, the binocular was not working properly but with naked eyes some glimpses of the top of Gurudwara Kartarpur Sahib could be viewed. 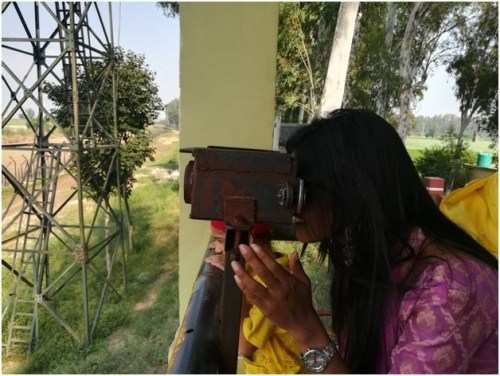 There were a good number of visitors and on enquiry, I learnt that every day good number of travelers arrive at the border. Meanwhile, one of the group arrived and they had their own binoculars. I was lucky to have darshan  of Kartarpur sahib closely with binoculars. 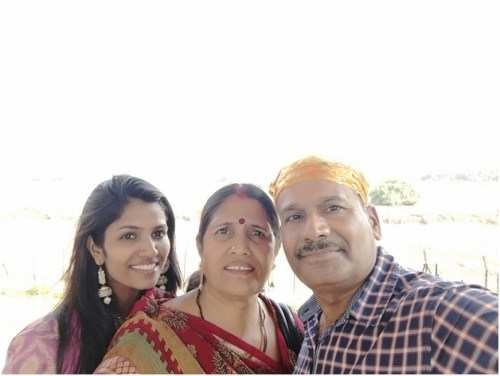 Coming to the issue of the opening of this corridor from Pakistan side, it will be a huge move for the Sikh community all over the world. Even though both neighbors have had bitter relations for decades, the corridor, if opened, can bring some meaningful advance towards normalcy of relations.

This can break stalemates and pave way for better understanding. However, India has to be cautious from its past experience, where former Prime Minister Atal Bihari Vajpayee traveled in the inaugural bus himself to Lahore for normalcy and Lahore declaration was signed in Feb 1999. The Indian mission for harmony led unfortunately to the unholy mission Kargil for Pakistan.   Therefore, India on her part has to be cautious. On the day of my visit I happened to meet a reporter of a prestigious national daily and interacted with him.  The general public opinion was that the passage may be opened keeping in mind national interest.

The Author of this journey is Mahendra K Kothari, Honorary Correspondent, UdaipurTimes.