Tourist season brings in traffic jams but that is acceptable to Udaipur since it is one of the best tourist destinations. 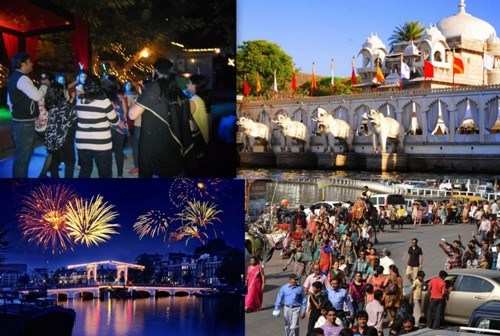 2017 was an eventful year. We have just said goodbye to it. As we have stepped into another year hoping for good events to happen, let us carry good memories ahead.

All said and done, wishes have been circulated and are still circulating. Udaipur city cannot forget all the incidents that happened this year…the good, the bad and the ugly. One thing that is both good and bad is the traffic of this tourist city. Let us go by the bad part first (ignore the ugly ones for now).

Public has been in for great trouble because of traffic jams in the city. Even the one-way traffic zones had vehicles moving at the pace of snail. The good part is that tourists poured into Lake City to a great extent. From the monsoon season to the “bidding farewell to 2017” season, Udaipur has been jam packed with tourists. Both Indian and foreign tourists have been in the city ever since Christmas…and they spent their last evening of 2017 in Udaipur.

Hotels were completely packed (they still are). Tourists from Gujarat, Maharashtra, Madhya Pradesh flocked in to celebrate 31st eve in Udaipur. Foreign tourists, too, had a good time spending the last part of 2017 in unique styles in Udaipur hotels which were decorated in different themes.

Roads were not simply bustling with activity, they were actually packed. With too much of tourist vehicles and each one wanting to reach destination on time, it was difficult to make way. Even one-way zones caused traffic to come to a stand still for longer than normal. With vehicles honking horns (which is a general practice even in a stuck traffic), some people could be seen yelling in order to move ahead.

Hotels are still booked/packed until 3rd or 4th January. Walk-ins were seen feeling disappointed since there was no room available. But the best part to think about is that Udaipur is very popular among tourists because of its cultural heritage and its beautiful lakes. Not to forget the other mesmerising locations which capture everyone’s heart…and it is also a hot favourite when it comes to destination weddings, pre and post wedding photo shoots and a lot of other events which happen one after the other.

Gujarati tourists rush into Udaipur every weekend. For them the attraction is not just a festive season or any other season but also Shrinath ji in Nathdwara. This year tourists from Maharashtra and Madhya Pradesh were also seen in great numbers.

On the evening of 31st December, people could be seen rushing to their party spots resulting in huge queues of vehicles on road. By 2130 hours, roads were comparatively easier to travel since most of the people were busy with celebrations.

By 10 a.m. on Monday, 1st January, tourist vehicles could be seen leaving the city. Ahmedabad road witnessed vehicles speeding on their return. The weather is getting colder day by day and hopes are still on that the tourist graph of 2017 will show a rise as compared to that of 2016 and will keep on rising in 2018 as well.