For such reservation there was a need to have a substantial debate among all interested quarters. The decision taken is in a hurry and fear looms large that it would turn out to be fiasco. 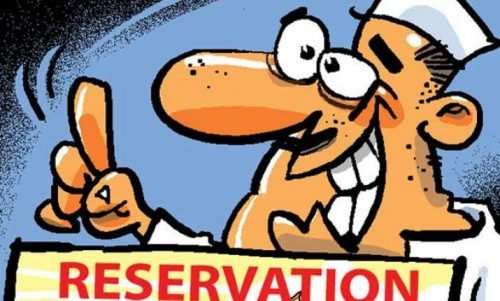 With the Loksabha elections around the corner, in a surprise and swift move, the Union Government announced on Monday that it would go for amending the Constitution of India to facilitate 10 per cent reservation for ‘economically backward’ citizens of upper castes in recruitment in government services and also admissions into higher educational institutions.

The last evening news bulletins were flooded with comments on the issue. It is further learnt from channels that that in the present session of parliament, the government is all set to introduce the legislation on Tuesday itself, which happens to be last day of the current winter session of Parliament.

Reservation on the basis of economic criteria has been on the agenda of the various parties and it has been discussed time and again without any concrete decision. It is hailed as bold step to take initiative to make it a reality. However, the path ahead shall not be smooth as there has been a upper ceiling of 50% on reservation. The Gurjar reservations in Rajasthan, approved by the different Governments at different time, is still to become a reality.

Again, the reservation announced is to come from 50% seats meant for upper caste or say general category. The criteria, as announced, is that the total annual income of beneficiary family should not exceed Rs. 8 lakh per annum and their owned agriculture land should not be above five acre. If any given result of RPSC, SSC, Railways, PSUs is taken up for analysis, the successful candidates of this new given class would already be more than 10 percent. Therefore, it can be convincingly said that there is no new relief except that in the seats meant for upper class or say general class another division is created. The loss, if any, is for middle class chunk and it is going to make recruitment system more complex.

Above all, it has to go through a lengthy legal battle in the backdrop of Supreme Court’s upper ceiling of 50% towards reservation. It is further known that Government is going to amend article 16 of Constitution of India to make this reservation possible. However, the task is uphill and it would be difficult to check the eligibility of a given candidate to avail reservation under this category. Moreover, for such reservation there was a need to have a substantial debate among all interested quarters. The decision taken is in a hurry and fear looms large that it would turn out to be fiasco.

Disclaimer: The views and opinions expressed in this article are solely of the authors and do not necessarily reflect the views of UdaipurTimes.