Redemption of A Sin or Two

Let’s steer back to the story. So, on a day like any other, an impressive young man like any other, entered our classroom. It was an interactive session, an interesting one, to say the least. But here’s the catch. He preached us values that have been preached to us all through our fourteen years of schooling...READ ON

I sent this text to our mentor, referring to the picture I had attached with it.

It all began fifteen days ago. Fifty students, on the cusp of adulthood, registered themselves for the Orientation Training. Dear reader, if you are unaffiliated with the Chartered Accountancy course, allow me to introduce you to this ‘Orientation Training’. It entails fifteen days of a myriad of faculties encouraging us to step out of our comfort zone; all through a range of bizarre activities and lectures. For those eager to learn, these fifteen days are a goldmine.

Let’s steer back to the story. So, on a day like any other, an impressive young man like any other, entered our classroom. It was an interactive session, an interesting one, to say the least. But here’s the catch. He preached us values that have been preached to us all through our fourteen years of schooling. “Be kind”, he said. Each one of us knew that; such a juvenile lesson to impart to nineteen year olds.

Have you noticed, though? Whenever someone sermonizes another to “be kind”, our mind somehow implies that the person uttering these words is so himself. It’s a baseless assumption. 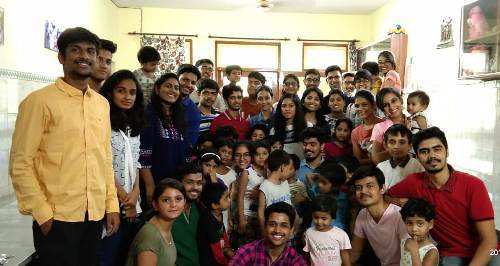 So, like countless others, he did his job. In addition, he offered us a path through which we may carry out the same. He asked each of us to donate a minimum of ten bucks and apply that fund for altruism. However, there was a condition. We weren’t supposed to ask our parents for the money; we were supposed to sacrifice a want of our own and donate that money to the fund. For instance, if I had a craving for a bag of chips, instead of spending ten bucks on it, I would hand over the money to the fund, thereby sacrificing my want for chips.

It was a noble idea, practical even. But if the past was any indication, I did not see the philanthropy taking place. However, the next moment, our mentor did the most unexpected thing. He pulled out his wallet and handed a hundred rupee note to the student assigned as the cashier.

‘This is just an incentive to get you started,’ he said casually and carried on with his lecture.  I pondered, had he flushed down the hundred rupee note down the drain? I vowed to do everything in my power to ensure otherwise. This did not concern the amount of money; the teacher was wealthy and hundred rupees meant nothing to him. But you require compassion exceeding your wealth for an act such as this.

Skipping ahead fifteen days, a text came by on our WhatsApp group, “the money has been collected, let’s decide a place to go.” Without much effort, we found a place where the needy resided (reveals a bit too much about the state of our country, doesn’t it?).

It was an orphanage, Mother Teresa Orphanage. The nun/caretaker allotted us the time of 4pm. So, naturally, by the time twenty two of us (out of the class of fifty) reached there; it was 4:25pm. All twenty two of us entered the orphanage and marched noisily up the stairs, leaving a trail of needless chatter behind us.

On the first landing, there were two long tables with a bench on either side of each. Seated by one of the tables were twenty four orphans. The chatter on our side abated the instant our eyes met theirs. I stood their dumbstruck, no clue as to how I should proceed.  While the orphans sat silently, patiently, expectantly. It was as if this awkwardness was routine for them; as if all the visitors experienced this phenomenon.

‘Give it a moment,’ their eyes seemed to be saying. It was incredulous and shameful how educated, privileged young adults like us expected the orphans to make the first move. There was an invisible veil between us. The hesitation on our side merits mention. The next five minutes were spent in silence. A couple of us began wandering around the table, occasionally caressing the cheek of one of the kids.  Among us, was a guy more sensible and warm than the rest of us. He sat on one end of the table and cheerfully spoke to the kids. He high-fived and bumped fists with them. Within thirty seconds, the kids on his end of the table were rolling with laughter.

Some in our party followed the initiator’s lead and engaged themselves with other kids. I conveniently took my place beside the first guy.

It was almost miraculous how once the veil had inched up a bit, how fast it went up altogether. The sudden wave of human intimacy was overwhelming. Five minutes later it was as if we had been there for five hours. The kids had left the table and were erratically charging around the room. Someone put on some music and suddenly everyone was dancing and jumping. Laughter of varying decibels blended in with the music. The formerly expectant faces looked like they had received what they sought; the warmth of human companionship. To us, they were no longer orphans. They were tiny souls bubbling with more energy than they could contain.

Half an hour later, the nun asked us to leave. She said that the kids were made to adhere to a strict schedule and now it was time for them to study.

We were disappointed but the kids weren’t. Like I mentioned earlier, this was routine for them. People coming to them day after day to redeem their sins. They were accustomed to bidding farewell to their visitors every other day.  Even if they were sad, they did not express it.

We left them with fruits, stationery and utilities while we left with an unforgettable half hour and a bit of unexplained delinquency. To this day, I cannot comprehend the pang of guilt that hit me while holding a six-month old orphan in my arms.

All said and done, the task our mentor set forth had been accomplished. I’d like to believe a sin or so may have been redeemed too.