When Rules are Meant to be Broken, How will India have ‘SAFETY GENTLEMEN’?

for...how long can we go on blaming the authorities..read on 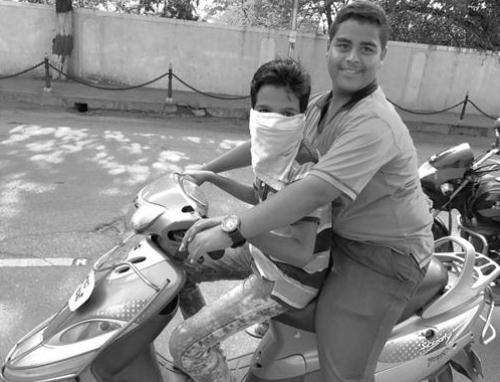 This picture was clicked near Field Club in Udaipur. Two children were seen driving Scooty in the middle of the road. It was very evident that the one sitting in the front was a learner and the elder one sitting as pillion rider was teaching him. Both were underage (as may be seen in the picture) and it was quite annoying to see such a sight which had stalled all the traffic.

Driven by the passion of bringing awareness about road safety, we decided to stop both these children and quiz them. Even though the tone was polite, the children got highly scared. For sure they knew what was coming next. Before I could question them, the elder one sitting at the back pleaded – “Uncle please don’t click our pictures. Don’t punish us. We are very sorry. We will never do this again.” The elder one gave justification that the younger one was insisting since all his friends drive too.

The child sitting in front quickly covered his face with a hanky. Not a single word uttered.

Their concern was complaint and my concern was to save 2 lives, which were at risk and their carelessness was risking lives of others too.

Now, there is a confusion – who should we blame? Was I questioning the right culprits or were the culprits sitting at home/office?

A conveyance is for convenience, but in the name of giving our children freedom and for purely our own selfish reasons, we push them for learning two-wheelers. The elder child was taught Scooty by his father and that is the reason he also decided to teach his younger brother.

My repeated request to know their names went in vain.

It is important to ensure that, as safety conscious employees of Hindustan Zinc, we do not allow our children to drive either Scooty or any four wheeler unless and until they attain the age to acquire driving licence and that also only after proper training.

On calling from mobile, after sometime their father came – apologetic and embarrassed – drove the Scooty, making both of them sit at the back.

Need we say – BE SAFE Zindagi