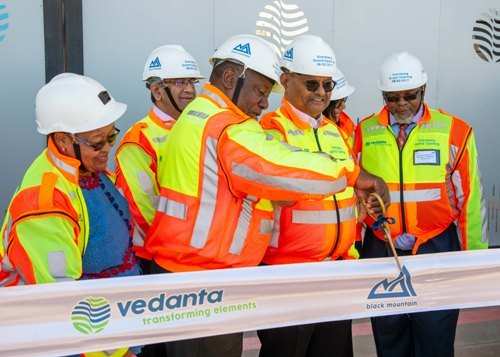 The Gamsberg zinc resource, though discovered more than 40 years ago, had been held undeveloped in the portfolios of various South African mining companies until Vedanta acquired it in 2011, as part of the Black Mountain Mining complex. Vedanta gave the project the go-ahead in 2014, and the first blast occurred in mid-2015 just eight months later.

Gamsberg has a reserve and resource of more than 214Mt with a grade of between 6% and 6.5% zinc and an estimated life of mine (LoM) of 30+ years.

Phase 1 of Gamsberg, celebrated today, represents a US$400 million investment by Vedanta in South Africa. This phase has a LoM of 13 years and will see 4MTPA of ore produced from the open pit and 250,000tpa of concentrate from its concentrator plant.

Evaluation for Phase 2 and 3, a further investment of US$350 to US$400 million, is underway. This will see ore mined increase to 8mtpa and increase in zinc-in-concentrate production, in a modular way to 450,000tpa, and ultimately to 600,000tpa.

Vedanta is simultaneously pursuing a feasibility study into the development and construction of a smelter-refinery complex, to the cause of Vedanta and Government’s commitment to local metal beneficiation.

Vedanta’s CEO, Mr Srinivasan Venkatakrishnan reflected on his time in the South African mining industry, and the pride he felt as President Ramaphosa opened Gamsberg.

Speaking on behalf of Vedanta, Chairman of Vedanta Resources, Mr Anil Agarwal emphasised his commitment to South Africa, and his belief in the future of the South African mining industry. Mr Agarwal also noted his and Vedanta’s support for President Ramaphosa’s immediate vision for the industry. He reiterated the commitment made by Vedanta to South Africa’s investment drive.

Delivering the keynote address, President Cyril Ramaphosa said: “The Vedanta Gamsberg project is an important step in our shared journey to revive our mining industry. It confirms our view that with an effective regulatory framework, improved collaboration between all stakeholders and sustained investment, mining has the potential to be a sunrise industry. “We welcome this substantial investment by Vedanta, which not only deepens South Africa’s relationship with India but also signals Vedanta’s confidence in the future of South Africa’s mining industry..”

Gamsberg is located in the ecologically sensitive Succulent Karoo Biome – one of the world’s 35 “biodiversity hotspots”. VZI’s biodiversity action plan includes the preservation of plants and seeds for post-mining replanting, and a biodiversity offset programme involving the purchase of 12,500ha of land.

Gamsberg is one of the most digitally advanced greenfields mining projects in South Africa. Digitalisation at Gamsberg includes Smart Ore Movement, Spatial Risk Monitoring and Management and Collision Avoidance Systems.

Vedanta is committed to local economic development in Khai-Ma and the Northern Cape. Spend towards local enterprises increased from R25 million in the 2016/17 financial year to R77.5 million for the 2017/18 year. From a CSR perspective, Vedanta has invested more than R44.6 million for the 2017/18 financial year on training and social projects aimed at skills development, education, health, enterprise development and municipal infrastructure support.

Governance and Sustainable Development are at the core of Vedanta’s strategy, with a strong focus on health, safety and environment and on enhancing lives of the local communities.

The company is conferred with the Confederation of Indian Industry (CII) ‘Sustainable Plus Platinum label’, ranking among the top 10 most sustainable companies in India.