'Maktub - It is Written' is India's first poetic short film, which is carved out of characters who communicate in the form of poems (shayari) instead of the routine dialog.  This is what makes this film worth the effort

All Characters appearing in this work are fictitious Any resemblance to real persons, living or dead, is purely coincidental. The Story, all names, characters and incidents portrayed in this production are fictitious. No identification with actual persons, places, buildings, and products is intended or should be inferred. No animals were harmed in the making of this motion picture.

These is the beginning slide of a motion picture that has made its home in our psyche over the years. We associate this slide to be the initiator of a motion film, replete with action, songs, drama and DIALOG. However, this time, the Dialor has been taken over by poetry – or Shayari as we like to call it.

‘Maktub – It is Written‘ is India’s first poetic short film, which is carved out of characters who communicate in the form of poems (shayari) instead of the routine dialog. This is what makes this film worth the effort.

Maktub, is a joint production of FairPencil Entertainment in associaiton with The Realistic Dice, My City My Angle of Udaipur and HK Entertainment, Jaipur. The movie is based on a story by Arunendra Kumar and the movie stars Himank Kalaal and Rani Viswas. Shot completely in Udaipur, the movie has been directed by Subastou Daksh Pandey and produced by Yatish Jain. 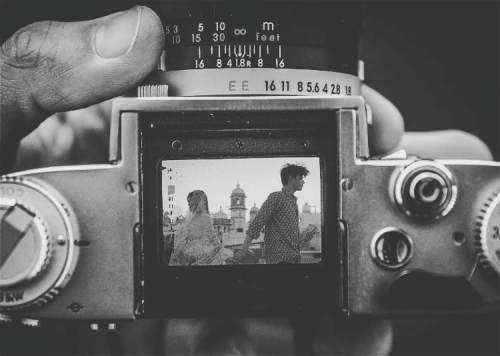 Writer, Arunendra, who also works in Vaco Binary Semantics, decided to come together with his friend Subastou Daksh Pandey, who has already made a few short films and music videos. The duo decided to communicate their story and effort with the audience in the form of poetry, to see how it is accepted.

Cinematography by Yashwant Sahu, background score by Sahl Jonas, the movie has been recorded and dubbed at Silhoutte Music in Mumbai. Post production has been done at HK Entertainment, Jaipur.he unique aspect of this movie is its dialog, which have been replaced by Shayaris and songs are all Qawwalis, the originals by Asif Nazir Niyazi and group of VX-Factor being recorded at Martand Studio, Udaipur. This is the first such film in India.

This team has attempted this sort of film, as an experiment to fulfil their long standing ambition of making a short film with shayari replacing traditional dialogs.