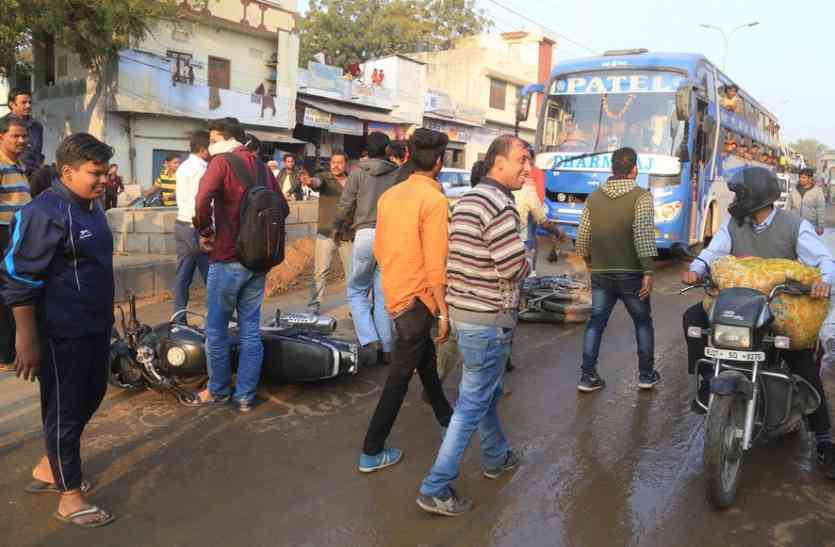 Beautification of road became the cause of injury for many two-wheeler riders. Work is in progress on Pratap Nagar to Sundervas road. Dividers are being made but no caution has been taken to keep the traffic smooth and secure.

On Thursday, many two wheelers slipped one after other on the road due to smooth and wet clay. For the last four days, renovation of the road is going on and clay was filled in for the space made for dividers. All this while, people faced discomfort in driving due to clouds of soil and smoke. Municipal Corporation did not pay any heed to this and the work went on.

Meanwhile, water spread on the road where clay was already present. This water came out as a result of drilling for hand pump. Consequently, the road became dangerously slippery and many two-wheelers suffered injuries after sipping on the road. Among the injured is a two year old girl child as well.

Agitated crowd did a show-down after these incidents by keeping iron angles and by parking their vehicles in the middle of the road. This caused a huge traffic jam from Thokar crossing to Pratap Nagar. Though Municipal Corporation’s attention was demanded on this issue even earlier, yet none of them turned up to look into this matter. Later someone rang up Mayor Chandra Singh Kothari who in turn sent XEN Mukesh Pujari and JEN Irshad to take a look. Mayor Kothari said that he sent his engineers to investigate the scene. Public displayed their agitation towards Municipal Corporation in front of police team.

It was also reported that police asked for approval letter for hand pump work. When the same was not produced, they seized the drilling vehicle and sent it to police station. Due to traffic jam, 4 ambulances got stuck. Public somehow cleared the route for them to pass through.