the diligent efforts of Neena Agarwal from Udaipur resulted in. After solo effort and running from pillar to post, she finally managed to convince the Education Department, of the need to provide primary education to children living in the urban wilderness of Juggi Jhopdis and Kacchi Bastis. 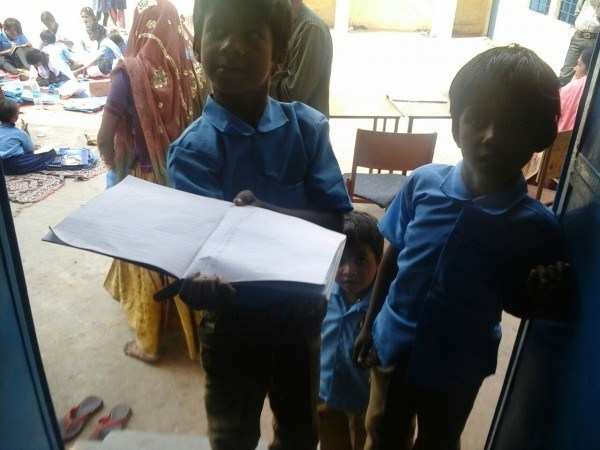 From Begging Bowl to Book

Social causes are aplenty, but it requires diligent effort and unwavering faith.  Support from friends, family and a helping hand from the governing principals of the land go a long way in achieving what one seeks out to do – bring a smile to a child’s face, get the child closer to education…

This is what the diligent efforts of Neena Agarwal from Udaipur resulted in.  After solo effort and running from pillar to post, she finally managed to convince the Education Department of the need to provide primary education to children living in the urban wilderness of Juggi Jhopdis and Kacchi Bastis.

Out of curiosity, one day a couple of months ago, I took to visiting the Jognimata Kacchi Basti situated opposite the Udaipur City Railway Station. Upon interacting with those living in the rotting make shift homes in that area, it dawned upon me that of the younger lot living there, none has been to school, simply because their parents cannot afford to send them to one…dire financial conditions have made them take up begging on a daily basis. 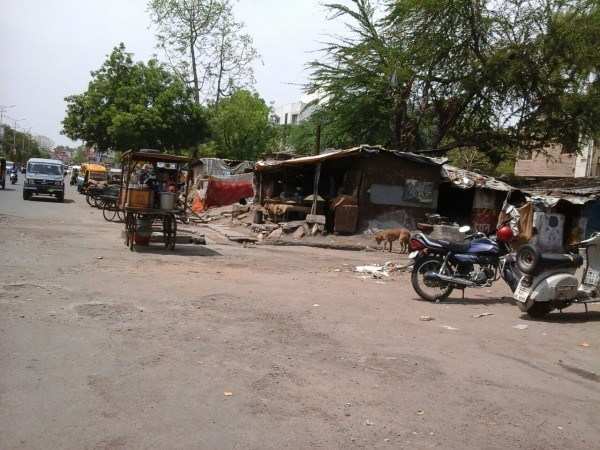 On speaking to the parents, and children, I realized that both were game to the children getting educated and were excited on the prospect, but for their lack of ability in getting the kids to school.  A bit of counseling the parents and urging, I managed to get 40 kids ready to go to school. 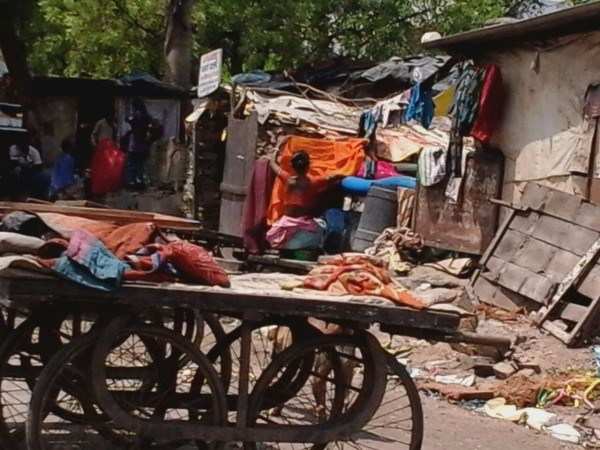 My next step was then to approach the regulatory authorities, in this case the Education department.  A very helpful District Education Officer, Bhupendra Kumar Jain, heard the entire situation and agreed to get all 40 students admitted to Rajkiya Vidhyalaya, a government school, operating in Sector 11, behind Vishal Mega Mart.  The school provided free of cost education and a mid-day meal for the students.  Hence, with the help of the DEO, I managed to get 40 students admitted to school…a heartening feeling I must say! 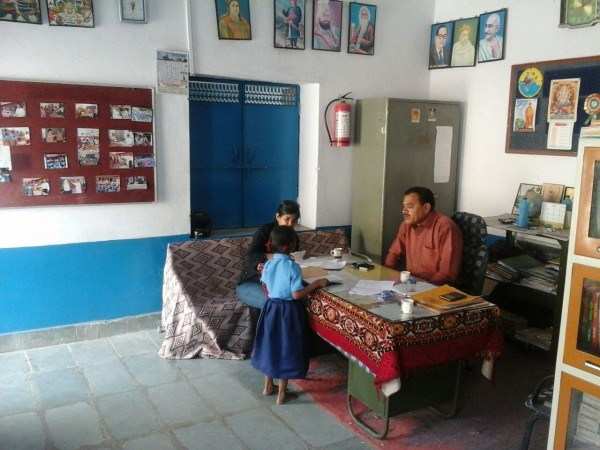 Over the next few days, I managed to enroll up to 100 students in the school and with a lot of help from family and friends, also managed to get them books, stationery and uniforms. 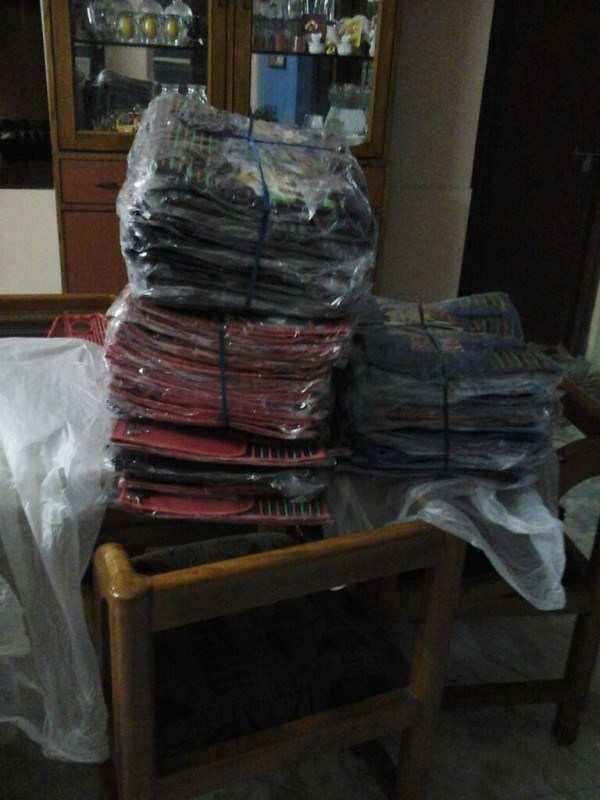 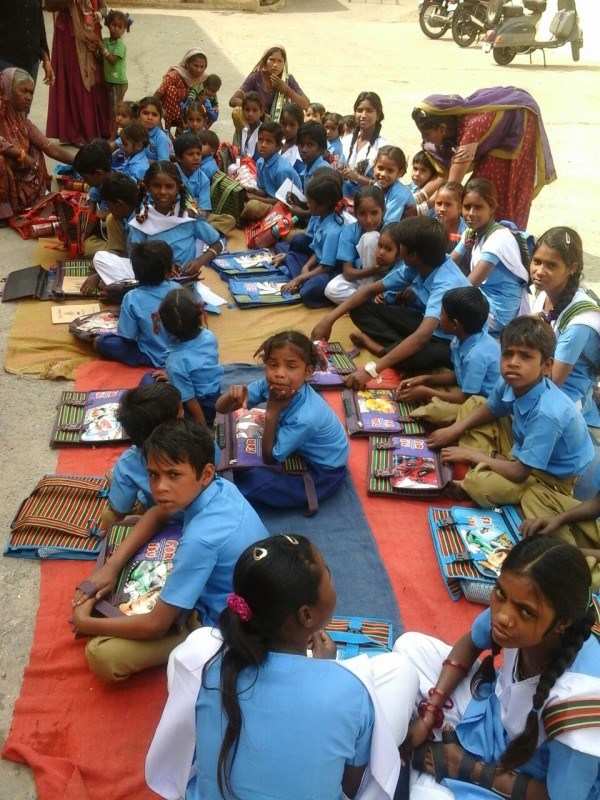 Bags Books and Uniform – All set in School

However, soon came a relevant problem – that of transport.  Being a busy road and no transportation available with the Slum dwellers, it was a problem getting the children to school.  Now comes in support from a resident building owner of the area.  For an agreed amount of rent, we managed to get a hall in a neardy building Gurmukh Bhawan, which also houses Kalpana Travels.  We will now be commencing operations of a make shift school, of course with support from the DEO and teachers of the Rajkiya Vidhyalaya, in the new premises for the 100 plus slum children who are willing to learn! 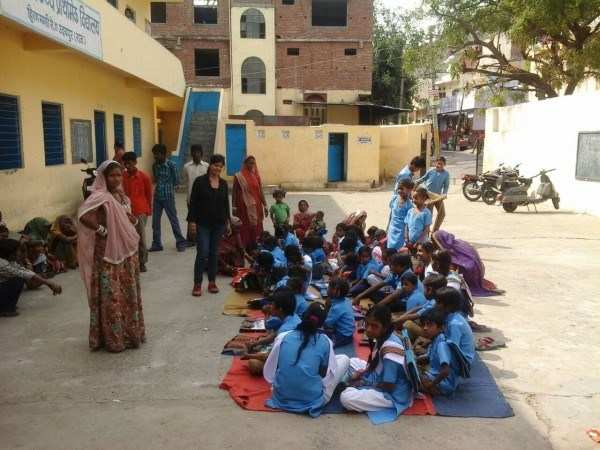 That was Neena’s story, in her own words and hats off to her for making this journey on her own; in such a short span of time, coordinating with relevant people to make things happen for the now fortunate children of the slum area.

In her conversation with UT, she also said that there exists a licensed Wine shop near the Jognimata Kacchi Basti, which adds to the woes of those living in that area – even the kids have taken to consuming liquor.  Matters become worse as the sun sets and none of the children venture out after 6pm.