To eradicate one of the social evils of “Child Marriage” on the occasion of Akshay Tritiya, Vidhik Seva Pradhikaran Udaipur organized a rally on Monday to spread the awareness and educate people about the ill effects of this social practice. 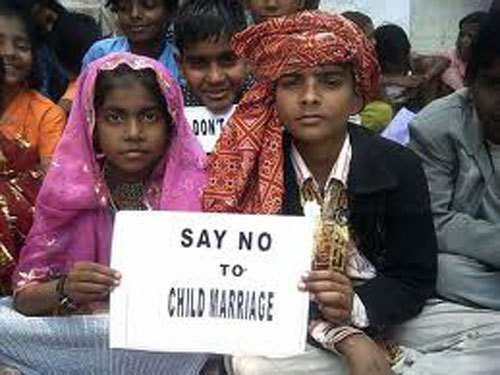 To eradicate one of the social evils of “Child Marriage” on the occasion of Akshay Tritiya, Vidhik Seva Pradhikaran Udaipur organized a rally on Monday to spread the awareness and educate people about the ill effects of this social practice.

On the occasion of Akshay Tritiya the representatives of the District Vidhik Seva Pradhikaran conducted a rally, participated by around 300 children. The rally begun in the morning from St. Gregorios Senior Secondary School situated at Khara Kuan area of the city.

While talking to media about the rally, Secretary Niraj Bhardwaj informed that as per the instructions of Rajashtan Vidhik Seva Pradhikaran, an awareness rally was conducted to spread the message of eradicating Child Marriage from the society. The students took part with slogans and posters in their hands against the social evil who tried to educate the people of Khara Kuana and the adjoining areas.

Rajasthan Vidhik Seva Pradhikaran initiated a State wide drive against Child Marriage. A mobile van under this program has been circling around villages, preferably those 16 identified districts of the state where the cases of Child Marriage are at large.  In other districts too, the representatives of D.V.S.P along with various social workers and associations are organizing different program for people’s awareness, said Bhardwaj.

Moreover the Caterers, Tent house Owners, Garden Owners, Saints and the DJs were all instructed by the officials not to take part in any of such child marriages which are being organized for which standing orders have already been served to all of them , added Bhagvat Singh Sankla , Member of Child Welfare Committee Udaipur.

Upon getting the information of any such Child Marriage, an Anti Child Marriage officer with the head of the local police station will rush to the spot and take action against the parents of the defaulters.

If any individual is caught carrying out the rituals of the Child Marriage even after being instructed by the officials, then a case will be registered against him considering it as a non bailable offence, Niraj Bhardwaj said.