Hindu Nav Varsh to be celebrated with full enthusiasm. 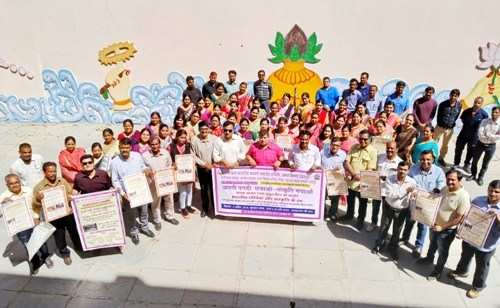 Hindu Nav Varsh is approaching. Following this, posters were released inviting everyone to join the celebrations and be a part of the programmes and competitions to be held for welcoming the new year.

Akhil Bharatiya Nav Varsh Samaroh Samiti, Municipal Corporation, Alok Sansthan and various other social organisations have joined hands once again to celebrate the Hindu New Year. Poster was released in Alok School, Sector 11 for the Turban tying competition to be held at Fatehsagar pal on 4th April. Dr. Pradeep Kumawat, Kamlendra Singh Panwar, Shiv Singh Solanki, Bhupendra Singh Bhati, Krishnakant Kumawat and many others including the entire staff of the school were present during the release of the poster which read – पगड़ी सजाओ-संस्कृति बचाओ |

The motive behind the entire celebration is to make the present generations aware of their culture. To begin with, yellow rice were offered to the deities and then to the public to invite them for the celebrations (offering yellow rice is a traditional system of invitation that has been followed since ages).

On 3rd April rangoli competition will be held followed by the turban tying competition on 4th April at Fatehsagar pal. The turban made by Daulat Sen which is 2 thousand metres long will also be exhibited. “Jal Sanjhi” will be done by Rajendra Vaishnav. On 5th April, Jai Hind Dhwaj Jyoti Kalash Pad Yatra will start from Hathipole and end at Gangaur Ghat.