In an unusual incident that took place yesterday in a residential building at Jhariya Marg, an alert and audacious home owner not only averted a broad day light robbery in his own house, but also managed to capture and hand over the culprits to the police. 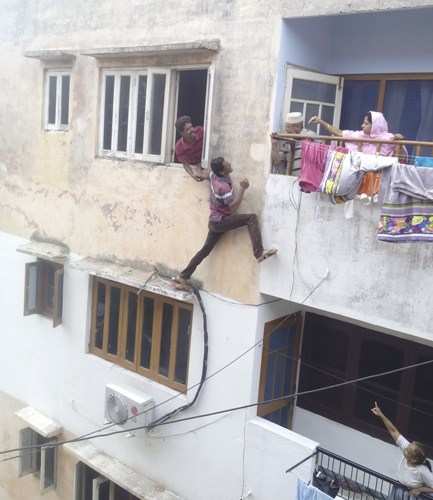 In an unusual incident that took place yesterday in a residential building at Jhariya Marg, an alert and audacious home owner not only averted a broad day light robbery in his own house, but also managed to capture and hand over the culprits to the police.

Firoz, s/o Abid Hussain Salumberwala resides at Jhariya Marg with his immediate family. It is Ramzan and Firoz, who works at Arvana, reached home to offer his afternoon prayers.

When he reached home, he noticed that his son had come back from school and was playing outside while the house door was open.  Not assuming anything untoward, he proceeded, when his son told him that there were two persons in the house, who had come to do some plumbing work.  Immediately, Firoz rushed into the house and noticed two men standing beside an open cupboard.  Firoz kept his composure and asked them why they were at his residence.  One of the men told him that they had come to repair a plumbing fault and Firoz casually asked them to continue their plumbing task, and show him what they were doing.  As per his son, Firoz said that the two came and told the kid that they had been called to repair a pipe in the house and that is how they entered the house.  The innocent child continued playing inside.

During this conversation, one of the crooks was edging towards the main door of the house, when Firoz, showing timely alertness, pushed the thief inside the house and locked the door from outside.  He then called 100 for Police Assistance, but the number went unanswered.

Meanwhile, people in the neighborhood were returning from Namaz and Firoz called to them for help and to watch the house so that the two men couldn’t escape.  He went to the nearby Hathipol Police Station to get help.

While he was at the Police station and his neighbors were watching the house, the thieves opened the window of the house and one of them tried to attempt scaling the adjoining common gallery to reach the main door and open it so that he and his partner could escape.  The house being on the third floor of the building, the stunt could have been fatal.  The neighbors in the opposite building noticed the scuffle and filmed the entire escape attempt on mobile.

In the meantime, the brave neighbors delayed the thieves escape while the Police reached the location and arrested the two men.  On interrogation, it was discovered that both were habitual thieves and had attempted many a robberies before this one attempt that took them in.

An FIR has been lodged and investigations are on to uncover any other such attempts that may have been made.

Jhariya Marg is a very noisy and activity filled area during most part of the day and night.  Astonishingly, a robbery attempt was made in this area, and that too in broad daylight.  Alertness of the actors in the episode averted what could have been a multi home robbery incident.