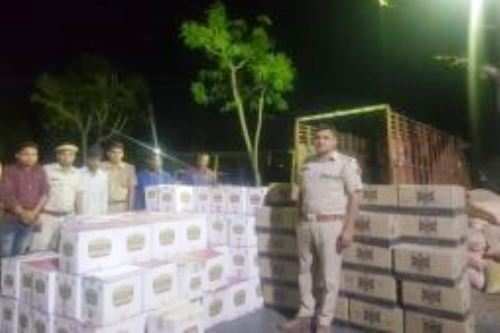 An Eicher truck with number UP14 AF 9521 allegedly transporting illegal liquor for distribution in Gujarat during the ongoing Lok Sabha election campaign work  was seized by the police team under supervision of Zawar Mines CI Bharat Yogi today. The liquor was being transported from Haryana.

A team from Zawar Mines was acting on messages communicated by an informant after the Udaipur District SP Kailashchandra Bishnoi launched a campaing to block vehicles which would be identified as possible carriers of illegal liquor.

206 bottles worth over Rs 30 Lakhof illegal liquor consisting of Episode Classic Whiskey (121 cartons), Mc Dowells (55 cartons), Royal Challenge (30 cartons) were seized in this exercise which was a big achievement for the team.

On receving information, the police team from Zawar Mines laid a road block near Oda village at Kevde ki Naal. An Eicher suspected to be carrying liquor was stopped the driver, Roshanlal Meghwal, resident of Udaipur was asked for papers and license. The police, on seeing his deliberated response, asked for the vehicle to be searched. The driver was detained and the truck and liquor confiscated. On interrogation the driver confessed that the liquor was being transported from Haryana to Gujarat and the purpose was distribution during the Lok Sabha election campaign work.

News Report as per Information provided by the Office of Superintendent of Police, Udaipur