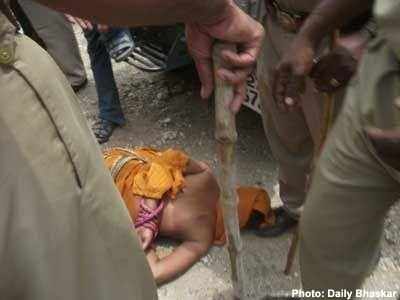 A married woman was partially stripped and forcibly chopped off her hair while a young man said to have extra martial affair with her was tied and badly thrashed by the mob of over 1000 people after the orders to ‘punish’ them was released by the village’s Caste Panchayat in Sarada area of Udaipur.

The incident that occurred on Sunday 22 July again raised the question on the role of Khap and Caste Panchayats and their illegitimate judgments.

According to sources, a married woman who also has a 3-year-old daughter was into extra martial relations with a man who used to work in the same village while the husband of the woman was employed in Ahmedabad.

As per the sources, on the night of 21 July, both the man and the woman fled away from the village. However the villagers who had already started searching them finally found them near Keshariyaji and brought them back to the village.

The panchayat decided to punish them and the woman’s husband stripped her in front of whole village before cutting her hair.

The mob turned violent when police tried to rescue the couple. Two policemen were reportedly injured in a stone pelting incident.

After rescuing both, Police took them to Sarada Police Station and lodged a case against the woman’s husband, people of the Panchayat and the mob.

UPDATE: 8 people are arrested in the case ( click HERE to read updated news)