Kalpit Veerval, student of MDS Senior Secondary School, Udaipur has cracked the IIT JEE Mains with a 100 percentile scoring 360/360. The cut off for the Common Rank List stands at 81 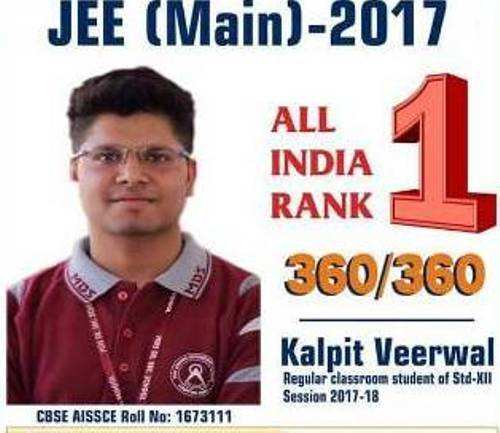 Kalpit Veerval, student of MDS Senior Secondary School, Udaipur has cracked the IIT JEE Mains with a 100 percentile scoring 360/360.  The cut off for the Common Rank List stands at 81.A student of MDS Senior Secondary School, Kalpit has also been a student of Resonance Udaipur over the last 5 years.  Kalpit scored a 100% at the IIT JEE Mains 2017 taking his performance in competitive examinations near to the zenith.  This achievement has now made history, as this is the first time that a candidate has scored 360/360 at JEE-Mains. 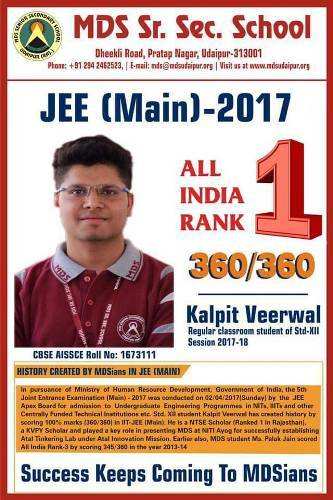 In a conversation with UT, Shailendra Somani of MDS Udaipur had this to say…

“Kalpit had a near 100% attendance record in school.  Being an extremely obedient student, he was always focused and passionate about academics with interest in sports.  MDS identified his aptitude at a very early stage and provided him the right environment, which allowed him to concentrate on his skill areas.  A resident of Pratap Nagar, Kalpit has an immense bonding with his father who has been extremely vigilant through his last few years at school.  He also ensured that Kalpit spent most of his time at studies and sport.”

Kalpit has been the blue eyed boy at Resonance, Udaipur as well, as communicated by the center to UdaipurTimes.  “Kalpit has been with Resonance since his 8th grade.  He topped all india in the Indian Junior Science Olympiad in the 9th standard, cracked the top spot at the NTSE while in his 10th grade and topped the KVPY when he was in his 11th Standard” – said Dr. Mohit Wadhwani from Resonance, Udaipur.