‘Gavri’ the Opera of Mewar

Gavri is a semi musical and dramatically performed religious ritual exclusively demonstrated by Bheel Tribe of Mewar Rajasthan.There is no particular stage or professional performers to participate in this ritual, the common tribesmen chose any suitable place near their village and started performing Gavri.

There is no particular stage or professional performers to participate in this ritual, the common tribesmen chose any suitable place near their village and started performing Gavri. Till  40-days Bheels proscribe wearing leather shoes, eating green vegetables, making physical relationship and using bed to sleep. This might be just another performance for some but to those who perform, it is more a devotion.  For the Bheel Community it is a medium to connect with Lord Shiva by their religious acts and display, presented at various places in and around Udaipur.

The word “Gavri” is the distorted name of Goddess “Gauri”, wife of Lord Shiva. Bheels believes that by blessings of goddess they will get free from all the miseries and pains of life. They also believes that Goddess Gauri enters a human body and announces the commencement of Gavri, the message is then passed to the Bhopa (priest). Over powered by the feelings sometimes character playing Gauri’s role or spectators feels presence of goddess within them, they strongly believes that the  goddess has entered in their body to bless them. 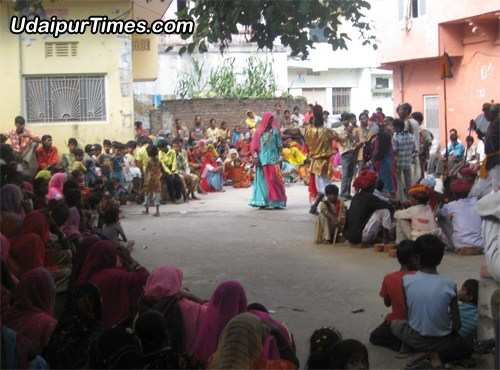 The story of this act is based on a demon Bhasmasur who worshiped Lord Shiva. Shiva after getting pleased by his devotion agreed to grant him a wish. Bhasmasur requested to grant him a power that whenever he keeps his hand on anyone’s heads that person will die burning in fire.

After his wish was granted, Bhasmasur started misusing it by spreading terror and killing innocent people on earth. Worried about the problem Lord Vishnu decided to resolve it. He transformed himself into a beautiful woman named Mohini – the dancer and went to Bhasmasur. As soon as Mohini started dancing in front of Bhasmasur, he fascinated by her beauty started imitating her. Mohini then tricked him by keeping her hand on her head, imitating to which Bhasmasur departed his life.

After departing from his body, Bhasmasur’s soul asked forgiveness from lord Shiva. He appealed Lord to keep him alive in mind of people in return of his great devotion. Considering his request Lord Shiva declared that, for paying homage to a great devotee like Bhasmasur, Gavri will be celebrated every year. Since that day this fest is organized in the region of Mewar by the Bheel Community.

Bheels believe that they are specially blessed by Lord Shiva to outperform this act, so no other community can do it. 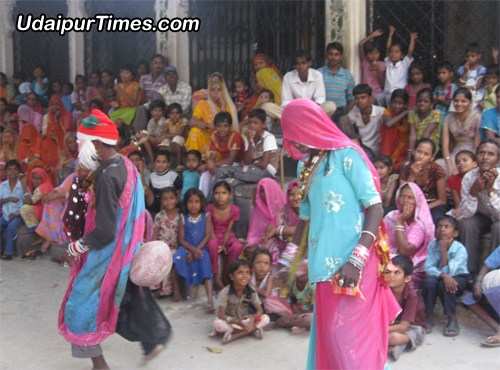 Gavri is full of music and singing. The artists sing songs and dance. The music is completely based on traditional instruments like Dhol, Mandal, Thali, Manjire and Dholak, Mandal being the key instrument.

The characters of Gavri are divided into four different groups.

Manav characters include human beings who are considered as the most developed and intelligent creature among the 8.4 million creatures present on earth.

Danav characters include those who are impure and preach falsehood. They are demon and ghosts. The main played characters are Bhiamval, Thieves, Witch Craft and Ghost.

Pashu characters include pigs, tigers, and elephants and other animals and insects. Lion of Goddess and Elephant.

Dev characters include Bhopa(priest), Shiv, Gauri, Raaiburia, Kalka and other Gods and Goddesses.

Only males play all the characters in Gavri; females do not take part in it.

Gavri is neither a talent nor an art form, no scene relates to any theme but still all scenes have their own importance. During the act, all the actors and the spectators get focused. They get involved in the show to such an extent that they get bound to the environment of spirituality.

The aim of Bheel society of to celebrate Gavri is not just an entertainment but to complete their religious responsibilities and to take spiritual blessings. It is held to please Shiva and to ask him to protect their village. After the completion of the act, every night verses are sung to please him. The depth of devotion can be seen in the performance of the characters.

It is neither a commercial show nor the actors want to earn out of it. Gavri is an art to express the devotion to God, to express happiness about the good rains, to show gratitude to deities for their support in their lives.