It Rained in Town Hall Last Week – It Rained Kathak

From Sufi Renditions to Bhajan Interpretations, Kathak was celebrated in all its glory and versatility by Kala Ashram College of Performing Arts, Udaipur 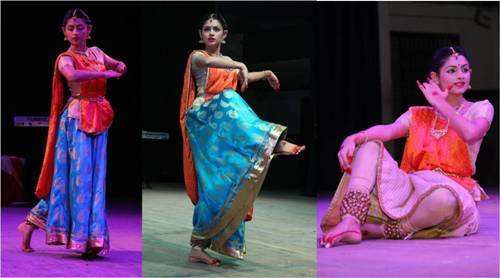 From Sufi Renditions to Bhajan Interpretations, Kathak was celebrated in all its glory and versatility by Kala Ashram College of Performing Arts, Udaipur

A good rain hints of its arrival with the teasing whiff of ‘Petrichor’. When tiny, happy, excited and cherry-blossomed faces dawned on the stage of Town Hall, every face in the audience bloomed with the spark of anticipation. The strands of a sweet folk music were soon in the air and so were these little girls from Kala Ashram College of Performing Arts, Udaipur who had opened the curtains on the annual conclave of the illustrious institute this year.

This celebration was more than a tick in the box for the institute though. As the next set of performances rolled forth, minds and hearts soon realized that they were witnessing a true, sublime and diligent celebration of Kathak and Dance in its quintessential form. Every performance had a clear connotation and every artist left a distinct feeling hanging in the air when they walked back after soaking the audience in a unique spectacle of dance, music, spirit and ecstasy. 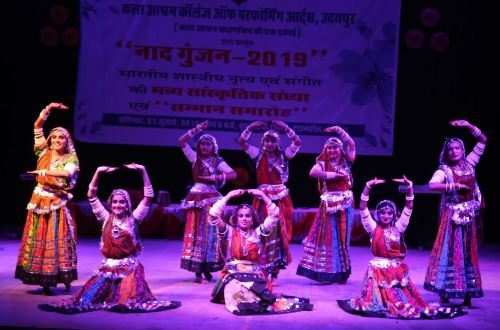 The nimbus was heralded well when Hridaya Khatri changed the weather of the space with her consummate act of ‘Madhurashtram’ and ‘Shudh Kathak’. Soon the atmosphere was gathering gushes of winds of every kind- there was ‘Shringaar’ by Neetu Sharma depicting the ‘Gat Bhaav’ element of Kathak, there was ‘Kalaangan’, ‘Shiv Vandana’ and ‘Guru Vandana’ by students of various batches demonstrating the epitome of joy-brimmed dance  beautifully interspersed with technical excellence of Kathak todas and details.

What the winds warned of, was carried forward with the rumble of Sufi thunder. ‘Murshid’ and ‘Ishq’ left a lot of eyes and ears wondering if they had just watched spectacular Kathak or had been immersed in hypnotic Sufi songs. It was both, as they soon sussed out.

All this was well-punctuated with flashes of lightning from solo performances like Madhuram Khatri’s pearl of Sufi songs or Dr. Shilpa Nahar’s expression of a woman torn between love-and-duty.

The final, big and unfettered splash of rain came upon everyone – at the right time, with its cherished sweetness and its mystic force. ‘Ram-Stuti’ was quite a downpour of devotion punctuated with the sleet of classical spins and the team (Anusha Sharma, Diya Shrimali, Geetanjali Rana, Kinjal Pandit, Mitula Panday, Priyanka Bajaj, Tejaswini Rana) ensured that people experienced the pure drops of spirituality seeped in their utmost magic and impact. The soothing drizzle changed to a torrent when Director Dr. Saroj Sharma took everyone along on a sky-bound drive to the ultimate symphony of four ‘taals’ together with the show-stopper of the evening ‘Taal Tarang’ which manifested an intricate but seamless triangle of ‘Dhamaar’, ‘Ektaal’ and ‘Jhaptaal’ before melting it all into the bedrock of ‘Tritaal’. Students from all age-groups and batches be it Jeevisha, Riddhishri, Dishti, Jainika, Rakshika, Pranavi, Khushhaali, Yalini, Manasvi, Katyani, Sharanya, Divya, Palak, Navdha, Maahi, Pravadhi, Shagun, Yashvi, Khanak, Chanda, Hina Parikh or Kalpana Kothari – came together as a single stream of delight and brilliance at Naad Gunjan and mesmerized the audience with the heights and depths of Kathak. 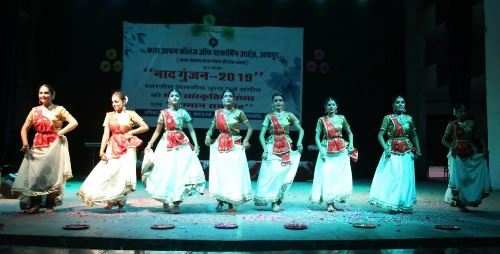 The team also had seasoned artists like Suraj Gandharv, Lalit Verma, Indra Kunwar Rana and Madhuram Khatri supporting them on various aspects along with anchors Dr. Sheetal Shrimali and Dr. Payal Kumawat. Encouragement and expert appreciation was also showered generously thanks to veteran guests like Smt. Nirmala Sanadhya, Lalit Verma, Rafiq Saheb, Jagdish Verma and Fayaz Khan Saheb, who were venerated in a special ‘Guru Samman Samaroh’ that expressed gratitude to these accomplished mentors and teachers in various genres of classical music and dance.

Awards were also conveyed to 61 students across various categories like Nritya Shri Samman, Nritya Prabhakar, Nritya Visharad and Best Student of the year award wherein winners of various national and international festivals from the Ashram were felicitated here.

Dr. Dinesh Khatri – Chairman and Trustee, Kala Ashram Foundation, Udaipur welcomed the Guest of Honour Sh. Chandra Singh Kothari, Hon’ble Mayor, Nagar Nigam, Udaipur and esteemed guests Prof. Gaytri Tiwari and Dr. Rajeshwari Narendran. He also set the context of the programme well before the performers took everyone on this glorious journey. When the evening concluded, it did not feel like a programme had ended, it felt like a lovely downpour had quenched the thirst of art, music and divine beauty for every face and ear in the auditorium.

And all that stayed as a reminiscence of this beautiful experience was a calm halo of grace and exquisite smile that beamed on the face of Guru Saroj Sharma Madam, the firmament that nurtured this beautiful rain right from the first condensed drop of an idea until the last bead of bliss that every viewer experienced when ‘Taal Tarang’ came to a crescendo. She had worked hard with all her creative and artistic brilliance for the last three months and everything that the evening’s performances transpired was an echo of her grand vision and passion for Kathak.

As people and students walked out of the doors, everyone was rinsed of all stress and nonsense of the mundane world outside. Everyone was drenched, and happily so.