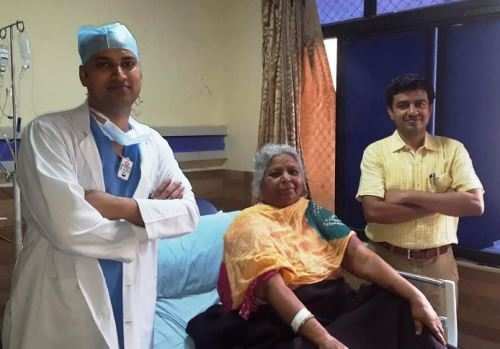 Udaipur resident, Meena Saxena, age of 65 years, had an old history of suffering from liver cirrhosis since 2012. The persistent symptoms of anxiety, black motion, vomiting, low blood pressure, internal bleeding in frequent intervals compelled the relatives to rush to hospital. On consultation to Gastroenterologist Dr. Pankaj Gupta, the investigation of endoscopy were performed which was normal but the internal bleeding was persisting.

Since this cannot be treated with endoscopic procedures, so the patient was then referred to Neuro Vascular Interventional Radiologist Dr. Seetaram Barath. Dr. Barath then chose Balloon Retrograde Transvenous Obliteration of Varices (BRTO) procedure to treat the patient.

“The patient was shifted to cath lab where through the veins of neck a balloon catheter was inserted near the ectopic varices and was used to stop bleeding. Internal bleeding may become life threatening if not timely cured by super specialty doctor. The patient was then moved to ICU where dedicated & compassionate care of doctors made the patient recover well. If the patient would not have been treated by this procedure then she may had to opt for an open surgery which could be complicated”, said Dr. Barath.