A man's hand got severed while he was working on a laundry machine. 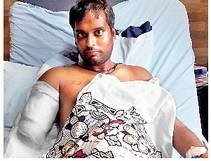 A man’s hand got severed while he was working on the laundry machine in Lake Palace Hotel. Supervisor Mahendra Solanki of Laundrettes Group was working on the machine on 7th September in Hotel Lake Palace. His hand suddenly got stuck in the machine. After an effort of 3 hours, the machine was cut open to release Mahendra’s hand. Since the condition of his hand was extremely bad, doctors had to cut it off to prevent the infection from spreading in his body.

Mahendra is undergoing treatment in Geetanjali hospital. His family has accused the company of not providing compensation for this accident which happened while he was in office. As per employment rules, Mahendra is eligible for a compensation since he was on duty when the accident took place. The family also said that the laundry company uses poor quality machines which invite danger. There are no security arrangements either.

The matter has been reported to Ghantaghar Police station. Mahendra’s brother Anish Solanki said that his brother is working with the company since a long time. They have demanded compensation but the company’s MD is not providing the same.

As per Laundrettes Group Managing Director Atul Chug, the company will pay full attention to Mahendra’s well being since he is their long time employee. He will be given lifelong compensation from ESI.  Chug also said that once Mahendra is out of hospital, he will resume his services. Since his hand got severed, he will be asked to supervise the work in the laundry.