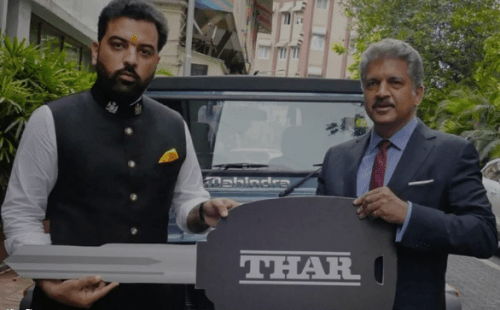 Available in limited numbers, the Mahindra Thar 700 was introduced earlier this year as a final hurrah to the current generation version of the off-roader. The production for the limited edition is restricted to 700 units that carry a special badge at the side to celebrate 70 years of the automotive manufacturer.

The Mewar family of Udaipur is known for their love for automobiles and they also inaugurated the vintage car museum in the city. The Thar 700 will be part of the Prince’s personal collection that includes a host of luxurious and exotic cars including the Rolls-Royce Ghost. The Vintage & Classic Car Collection (VCCC) musuem though includes a number of vintage Rolls-Royce cars, all of which have been completely restored, along with two right-hand drive Cadillacs, a number of Mercedes-Benz cars, 1947 Chevrolet Bus, 1950 Morris Tiger, Ford Model A, 1942 Ford Jeep and a lot more.

The Mahindra Thar 700 that finds its origins to 1949, will be at home with the Mewars who appreciates legacy. The limited edition gets a blue paint scheme with a special badge on the side fender that carries the signature of Mr. Mahindra. It also comes with decals on the bonnet and side fenders, a black finished grille and 5-spoke alloy wheels. The cabin also gets black seats with the Thar logo embossed for the special touch, while ABS is offered as standard on the model.