Geetanjali Medical College & Hospital, Udaipur conducted its first kidney transplant on a 33 years old man. The patient's mother, Basanti Bai, donated one of her kidney to her son. 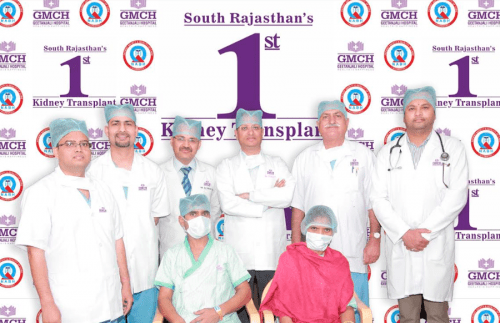 Geetanjali Medical College & Hospital, Udaipur conducted its first kidney transplant on a 33 years old man. The patient’s mother, Basanti Bai, donated one of her kidney to her son.

“Kidneys of the man had failed in the year 2003 as he was diagnosed with high BP & swelling in his body. He was on medications for the same. On investigations of kidney biopsy, he was diagnosed with Glomerulonephritis. This disease occurs due to auto immune disorders. He continued his medicines for two years and discontinued. In December 2018 again he suffered the same problem of high blood pressure which resulted in complete renal failure. He was admitted in Geetanjali Hospital where he came twice in a week for dialysis. He was then counseled for kidney transplant to which his mother agreed and donated one of her kidney to him.

Both of them were admitted in hospital and were on close monitoring for a successful transplant. Dr. Patel helped monitor their health and on investigations the mother was diagnosed with thyroid and slight blood pressure which was managed by Endocrinologist Dr. Onkar Wagh. The complete and normal recovery led them shifted in kidney transplant unit for operation,” said Dr. Mukhiya, the Nephrologist.

“At times kidney transplant patients are at a risk of kidney rejection by the body which was controlled by medicines. Also to reduce the risk of infection Dr. Upasna Bhumbhla helped to maintain an infection free environment for the patient. Kidney transplant patients are more prone to infections for one year which need to be cared and prevented. To control this, the hospital has constructed a kidney transplant unit with an isolation room which doesn’t have direct entry. To enter into it one is supposed to change their dress and shoes, cover hands with gloves, head with cap and mouth with mask so that no infection is passed on.

The patient and his mother are being educated on daily basis to avoid any complications. The patient has also been asked to drink 8-10 liters of water per day for better recovery. “The dedicated and compassionate care here at GMCH have resulted in better outcomes where in turn the donor (mother) is discharged on the fifth day of transplant and the recipient is being discharged the tenth day from hospital which marks a good recovery of the duo,” said Dr. G K Mukhiya.

“The patients who had undergone kidney transplant are likelier (around 70%) to live more than 10 years than being on dialysis.”

“The surgery was very challenging for us as we have to transplant kidney of an elder patient. To remove the kidney it is first required to select the kidney from the donor as the healthier kidney will be with the donor only and the other one would be removed. To conform the standards of same investigations like renal scan, CT angiography and renal angiography were performed by Dr. Sitaram Barath and Dr. Ravindra Kundu.

To remove the kidney Laparoscopic Nephrectomy was performed as against open nephrectomy which is a better option available for transplant. It helps the donor recover well, less hospital stay, small scar and incision which reduces the chances of infection. With the help of small incision the main artery, aorta and vena cave were clipped and the kidney was removed. The kidney was kept in an ice tray and was cleaned through kidney perfusion fluid.

“Since the surgery was performed on a bench it is also being termed as Bench Surgery. Now, the kidney needs to be placed in the recipient’s body. To place the same, a graft bed is being created. The kidney was then placed in pelvic cavity, below the lower abdomen,” said the treating transplant surgeon Dr. Pankaj Trivedi.

He also said that, “to plant the kidney an external ileach artery and external ileac vein were created which were then connected to the artery and veins of that respective kidney. The ureter was attached with the bladder and the normal flow of urine started in the OT itself. This was performed with the help of magnification loop as these tubes were as thin as hairs and the kidney was transplanted. During the procedure the kidney was continuously washed with ice water so that it can be kept cool. This procedure had to be completed in a time span of not more than 30-40 minutes otherwise it affects the working functionality of the transplanted kidney.”

The surgery was also very challenging as anytime during the surgery it could lead to excessive bleeding, thrombolysis, urine leak, infections which may affect the working of the kidney and also to maintain electrolyte and fluid balance in recipient. The doctors also said that they had prepared for the transplant 15 days before. The procedure need to be carried out very carefully and cautiously as any negligence may lead to complete failure of the surgery, thereby affecting the kidneys of both donor and recipient.

Geetanjali Hospital’s CEO Mr. Prateem Tamboli presented the history of the journey of Kidney Transplant Unit being installed in GMCH. He said that, “Geetanjali Medical College & Hospital is a quarternary care multi super-specialty hospital where the complete experienced and skilled team of renal as well as other organ transplant is present. At GMCH, before the procedure, during the procedure and after the procedure, international standards of medical treatment is provided to patients. There are more patients registered with us for kidney transplant and soon will be operated for the same. According to data provided by NATO, on every 10 lacs patients 250-350 patients are being diagnosed with renal failure which require renal transplant. We must also pledge to donate our organs so that we could save 8 lives and spread smiles.”

Geetanjali Group’s Executive Director Ankit Agarwal said that, “South Rajasthan’s first successful kidney transplant here at Geetanjali Hospital is a matter of pride for all Mewar region. I bow my head and give my deep respect to the mother (donor) for giving new life to his son. Soon, heart and liver transplant surgeries will be started in GMCH. I am really very thankful to all our doctors and Government of Rajasthan for giving the permission of kidney transplant so that the services could be availed by people of not only Udaipur but also from the surrounding regions. We’ve also established a trust named “Lt. Narmada Devi Agarwal Trust” where the needy patients can avail the medical benefits free of cost.”