Rajesh Chaplot, an ex-St Paulian and a resident of Udaipur received the Pravasi Bharatiya Samman Award (PBSA), 2019 from H.E the President of India Shri Ram Nath Kovind on 23rd January 2019 at Pravasi Bhartiya Divas, Varanasi. This is the highest award given to any Non Resident Indian.

Rajesh Chaplot, an ex-St Paulian and a resident of Udaipur was felicitated with “Pravasi Bharatiya Samman Award (PBSA), 2019 from H.E the President of India Shri Ram Nath Kovind on 23 January 2019, Pravasi Bhartiya Divas at Varanasi. This is the highest award given to any Non Resident Indian. 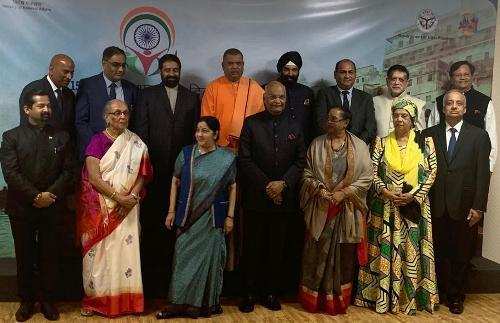 This award was given to Rajesh Chaplot, a 1982 batch alumnus for his contribution towards keeping the India flag flying high in Uganda & Africa. His family comprises of his wife Pratibha Chaplot, daughter Krati Chaplot, married to Aditya Chordia and lives in London & younger daughter Savi Chaplot who works as an Actuary in Dubai.

Rajesh Chaplot is a Chartered Accountant by profession and has resided in Uganda for the last 20 years. His contribution in Uganda /Africa includes his capacity as the CEO of Graphic Systems (U) Ltd., a printing and packing company based in Uganda. Chaplot has steered the company to its current position as the best printing and packaging company in East Africa. As the Chairman of the Indian Association in Uganda, he spearheaded the first Diwali celebration at the State House in 2012 with the President of Uganda, a tradition which has been maintained ever since.

In addition, Chaplot launched a monthly 6-page Indian content magazine called “Indi Vision” as part of the National Government Newspaper of Uganda (New Vision) to propagate Indian news, businesses, and culture in Uganda. He also formed the Indian Business Forum in Uganda to raise concerns of Indian business houses in Uganda with the Ugandan Government.

Chaplot is a business advisor to the President of Uganda, HE Yoweri Kaguta Museveni at the Presidential Investors Round Table. He is also a member of the National consultative committee of Ministry of Trade, Uganda. He was also on the Board of Uganda manufacturers Association for 6 yrs. He has been on the Board of Miss Uganda Foundation, Indian Women Association, Uganda and many others.

Among many awards, Chaplot has been awarded as Ambassador of Indian Award, in 2016 and Award for lobbying for Indian business community in 2017 and recently awarded as International Leaders Award from Institute of Chartered Accountants of India, New Delhi in 2018. 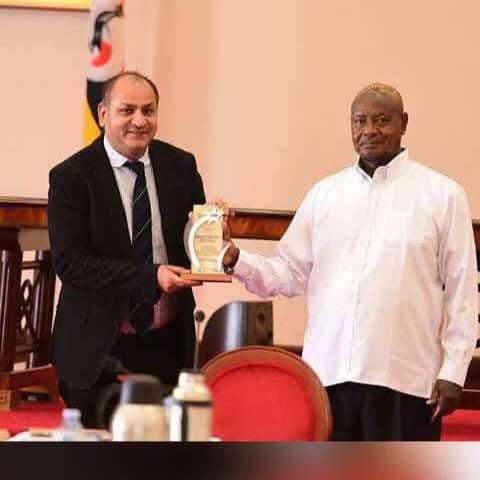 Under Chaplot’s leadership, the Indian Association in Uganda has launched several humanitarian and social initiatives such as creation of a life-saving drug bank, annual blood donation drives, and creation of a distress fund for Indians in Uganda.