Retired RAS officer's suicide has left everyone in shock. 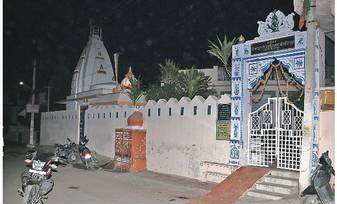 A retired RAS officer said goodbye to the world. He was found hanging inside a temple.

Commissioner (twice) Devasthan Department, reportedly committed suicide. He was found hanging inside the temple he visited daily. Retired RAS’s suicide has raised questions in the minds of people. He was considered to be a man of strength. His suicide has come as a shock to people and of course, to the family members in particular.

His last message on social media was about strength. It read “Koi bhi lakshya manushya ke sahas se bada nahi, haara vahi hai jo ladaa nahi”. After this, he posted once about income tax. He used to frequently post messages on social media but posted only thrice in the last 5 months.

Reasons behind his suicide are not yet known. It is being pointed out that he was in stress for quite some time. Three years back, he retired from the post of Commissioner from Devasthan. He graced the posts of CEO of Zila Parishad, Commissioner Municipal Corporation and twice as Commissioner of Devasthan.

As per reports, the RAS officer had built rooms in Charbhuja temple (parental property) in Devali. He used to visit this temple every afternoon around 1 p.m. and left the premises at 7 or 8 p.m. On the day of the incident, he did not come out of the room even at 8 p.m. which caused concern. The pandits in the temple went to check his room which was locked from inside. They broke open the door and found him hanging in the room.

Police recovered his mobile from the spot which had several missed calls. Most of the calls showed timing after 1 p.m. There was blood in the room which had dried up by evening. It is being assumed that he committed suicide around 1 p.m.

The administrative lobby officers informed that the retired officer was in tension right after his retirement. For him spending free time after retirement was difficult. He had started yoga classes in temple premises after his retirement to get rid of stress. As per his neighbours, his wife recently got promoted as Principal and was posted at Chittor.

He is survived by 2 sons. One of his sons is lecturer in college and the other son is an IITian. Even the family cannot think of a reason behind his suicide. The news of suicide has spread like fire. People are still unable to assess the reasons of suicide since he was known for his strength.