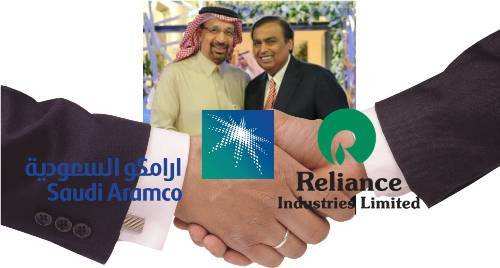 Saudi Aramco and Reliance Industries Limited (RIL) agreed on 12 August 2019 to a non-binding Letter of Intent (“LOI”) regarding a proposed investment in the Oil to Chemicals (O2C) division comprising the Refining, Petrochemicals and fuels marketing businesses of RIL. Saudi Aramco’s potential 20% stake is based upon an Enterprise Value of US$ 75 billion for the O2C division. This would be one of the largest foreign investments ever made in India.

The indication of such a partnership came into picture when Mukesh Ambani invited Khalid Al Falih, Saudi Oil Minister to Isha Ambani’s pre-wedding event at Udaipur and the two stalwarts held a meeting during the stay here.  This was reported earlier by UdaipurTimes, after the Oil Minister had tweeted that Saudi Arabia, the world’s largest exporter of oil and Mukesh Ambani led Reliance Industries Ltd have discussed joint investment plans in petrochemicals and oil refinery projects briefly.  The deal has culminated into the biggest foreign investment in India. 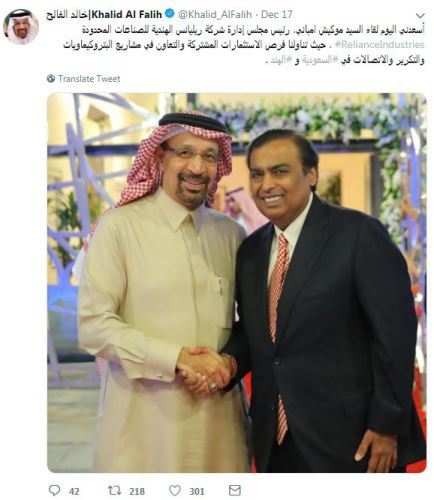 Saudi Aramco and RIL have a long-standing crude oil supply relationship of over 25 years. Saudi Aramco is the world’s largest and lowest cost-per-barrel producer of crude oil, is geographically close to India, and offers a wide range of crude supply options. To date it has supplied approximately 2 billion barrels of crude oil for processing at RIL’s refinery at Jamnagar.

RIL’s Jamnagar refinery is the largest and most complex refinery in the world, with deep integration of refining and petrochemical activities across multiple manufacturing facilities. The proposed investment would result in Saudi Aramco supplying 500 KBPD of Arabian crude oil to the Jamnagar refinery on a long term basis.

“I am truly delighted to welcome Saudi Aramco, one of the largest business enterprises in the world, as a potential investor in our Oil to Chemicals division. We have a long-standing crude oil relationship with Saudi Aramco and we would be happy to see this further strengthened with this investment. Saudi Aramco’s interest is a strong endorsement of the quality of our assets and operations as well as of the potential of India.” – Mukesh Ambani, Chairman and Managing Director of Reliance Industries Limited

RIL is the top most ranked company from India to feature in Fortune’s Global 500 list of ‘World’s Largest Corporations’ – currently ranking 106th in terms of both revenues and profits. The company stands 71st in the ‘Forbes Global 2000’ rankings for 2019 – top-most among Indian companies. It ranks 10th among LinkedIn’s ‘The Best Companies to Work For In India’ (2019).