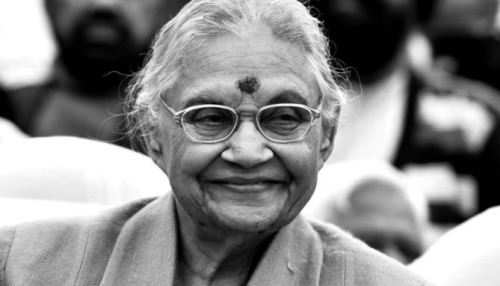 Iconic Congresswoman Sheila Dikshit passed away today afternoon at the age of 81.  She was hospitalised at Escorts Fortis at 10:30AM today, and while an able team of doctors did manage to keep her on life support, another cardiac arrest at 3:15PM proved fatal and the 15 time Chief Minister of Delhi passed away at 3:55PM.

As per media reports, Sheila Dikshit had been unwell for quite some time.  She was an icon in the political and social domain at both state and national level and was very close to the Gandhi family.  The Delhi government has declared a two-day state mourning. 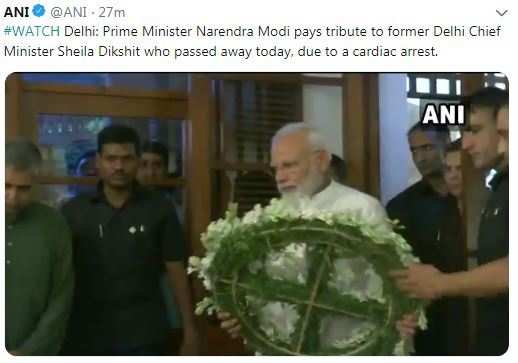 At the time of passing away, she was the President of Delhi Congress and previously held the post of Chief Minister of Delhi for 15 years, a reign which saw the transformation of the national capital’s transport system with the introduction of Metro and Flyovers among other massive infrastructure developments. Her political stint also saw her don the role of Governor of Kerala. 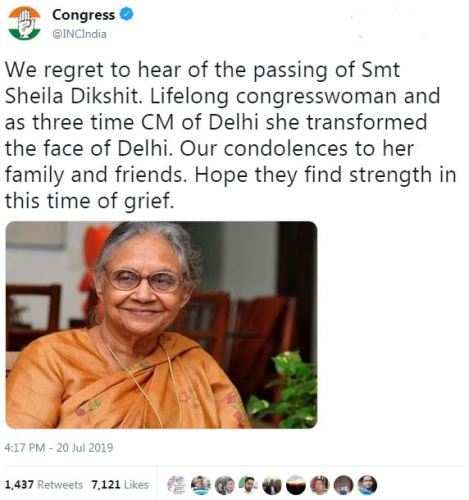 Her inclusive development model during her term as Chief Minister and even without, while being active in political and social circles, saw the launch of a number of social welfare schemes, with the participation of resident welfare associations.

Sheila Dikshit drew widespread respect from all political parties due her warm nature, resulting in her being an affable and able administrator.

Her political journey changed orbit in 1984, when she became a MP from Kannauj in Uttar Pradesh.  A very close associate of former PM Late Rajiv Gandhi, she served as a Minister in his cabinet.

Sheila Dixit’s body will be taken to the Congress headquarters at 12PM tomorrow and the last rites will be performed at 2:30PM