Geetanjali to Represent Udaipur at State Level in Badminton

17 year old Geetanjali Jodha will represent Udaipur in state level badminton championship after she secured first position in under-19 district level sports tournaments a few days back. She defeated one of the students of St. Mary’s School Udaipur in her final match.

17 year old Geetanjali Jodha will represent Udaipur in state level badminton championship after she secured first position in under-19 district level sports tournaments a few days back. She defeated one of the students of St. Mary’s School Udaipur in her final match.

Geetajnali, who is studying in class 12th at The Study School, will represent Udaipur district in the state level tournament to be held in Ganganagar from 22 September to 25 September 2011. If she wins, she will qualify for the National level. 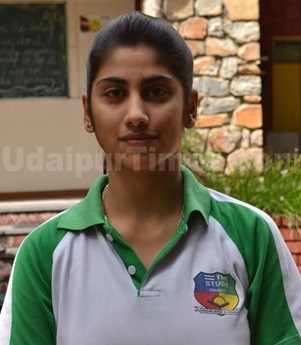 She had participated in the National Level school tournaments more than 5 times in the last 5 years and since she became obsessed with Badminton.

Though, Geetanjali aspires to make her career in administrative services, badminton is more a passion for her.

When asked why she doesn’t take it as a full time profession, the answer was shockingly worrisome.

“If I will get a chance to represent my country at the International Level, I might change my career priority but to reach on the top level we just don’t need only to be passionate but there are a lot of other areas of concern.”

Raising the question on poor infrastructure, Geetanjali said, “In Udaipur there is not a single badminton court available now as the only luv-kush stadium has been shut down from the last 3 years, there were two badminton coaches before but since one coach got transferred somewhere we are being trained under only one coach.

Moreover, if I want to practice with someone of my age, I have no choice except practicing with boys and that too not of my age which certainly affects my performance in real matches. Most of the girls don’t like to play badminton anymore; perhaps they can’t take over these obstacles” said Geetanjali an avid reader and a newbie gardener.

Daughter of Anand Singh Jodha, a horticulturist and Deepa Jodha who is a teacher in government school, Geetanjali was inspired to become a badminton player by her brother Lieutenant Dheeraj Jodha who encouraged her to take this sport while she was studying in 8th standard.

Little she knows about the other facts and myths in the field of badminton. Geetanjali was totally unaware of coming up difficulties but after being selected for various state and national level tournaments she has realized the fact that how tough it is to be a good sportsman in Udaipur.

After infrastructure the other setback is resources. Recalling her last experience in state level tournament she says, “Whenever we have tournaments outside Udaipur our team gets accommodation in class rooms of government schools. I still remember the first under-14 district level matches held in Karauli in 2008, the camp where we stayed had no court to practice, besides there were no facilities of bathrooms and we were forced to take bath in classroom.

Now, since our school bears our expenses we stay in hotel and all food and necessary things we buy at our own. As we get daily allowance of just Rs.50 by administration which can only buy us one time breakfast if we go for nutritious diet.

Still we sometimes get scolding from senior coaches for our poor performance. Though, I adore my first coach Poonam Devra and present coach Sunita Bhandari who are equally responsible for all my achievements.”

Geetanjali had achieved many prizes and recognitions which indeed describe her potentiality to become winning badminton players of India like Sania Nehwal and Shaili Rane but passion alone cannot always be able to fight with uncertainties created due to poor administration.

Like Geetanjali there are many sportsmen and athletes in Udaipur who are struggling hard to keep up their pace between all complexities. Most of them get vanished in the manmade dust while others change their path to become something which they are not made for.