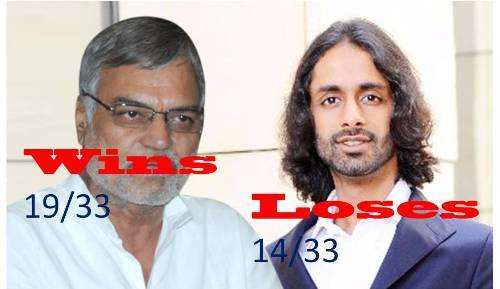 Defeating Lalit Modi’s son Ruchir Modi by 5 votes, Congressman CP Joshi was elected as the President of RCA, succeeding outgoing President Lalit Modi.  33 Votes were polled on 29 May, the counting of which took place today in the presence of ombudsman Justice Gyan Sudha Mishra.

CP Joshi has been a MP from Bhilwara in the 15th Lok Sabha  and was Minister of Road Transport and Highways and Railways in the Manmohan Singh led cabinet.

Interestingly, the post of Treasurer and Secretary have gone to Pinkesh Jain and Rajendra Nandu, who were from the Modi camp.

Getting in line with the Lodha Committee recommendations, elections for RCA were held on 29 May.  Post the polling on 29 May, the ballot boxes were sealed, while waiting for a decision from the High Court, which finally came on Tuesday, permitting for the votes to be counted.  Joshi, who has already been President of the RCA earlier, had tough competition in the form of Ruchir Modi, son of outgoing President Lalit Modi.