‘Green light’ for St Patrick’s celebrations around the world!

Over 250 iconic landmarks and sites around the world will be illuminated green over the coming days – as part of Tourism Ireland’s 2017 Global Greening initiative to celebrate the island of Ireland and St Patrick. 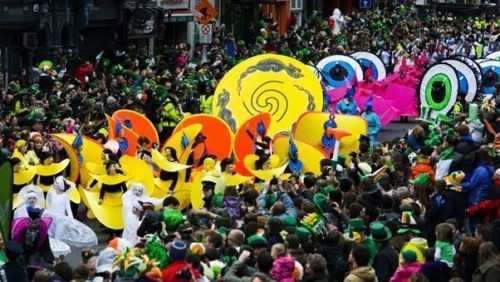 Over 250 iconic landmarks and sites around the world will be illuminated green over the coming days – as part of Tourism Ireland’s 2017 Global Greening initiative to celebrate the island of Ireland and St Patrick.

The annual initiative, now in its eighth year, which sees a host of major landmarks around the world turn green for St Patrick’s Day, has grown from strength to strength, with many new landmarks signing up to take part this year.

Niall Gibbons, CEO of Tourism Ireland, said: “This is the eighth year of Tourism Ireland’s Global Greening initiative and each year I am delighted to see even more well-known attractions and landmark sites wishing to get involved. The eagerness of cities and countries everywhere to take part underlines the strength of the deep connection that people all over the world feel to Ireland. More than 70 million people around the world claim links to the island of Ireland and St Patrick’s Day is a truly unique opportunity to reconnect them with their heritage.”

Of course, the ‘greenings’ are just one part of the St Patrick’s Day celebrations. The place to be on 17th March is Ireland where there are two festivals which shouldn’t be missed.

In Dublin, Ireland’s capital city, the ‘St Patrick’s Festival’ will last for four great days, taking in the weekend and running from 16-19 March.  The city will be alive with music, film, arts, dance, culture, fun and even international rugby.

Each year the festival has a different theme with this year’s ‘Ireland We Are’ giving the city a chance to showcase all that Ireland stands for today.  Festival favorites include the world’s largest outdoor céilí, world-class museums hosting free workshops and guided historic walks including famous sites such as the Guinness Storehouse. The main event, the St Patrick’s Festival parade, is held on Friday 17 March in Dublin’s city centre.

In Northern Ireland, the newly curated ‘Home of St Patrick Festival’ celebrates St Patrick, the man and the saint, as one of the world’s most inspiring and loved saints of all time. Taking place in the beautiful landscape of Counties Armagh and Down, which was once Patrick’s home, the festival will culminate on Sunday 19 March with ‘The Voice of the Irish’ closing concert in spectacular Newry Cathedral.