Let us go to Jungle Safari Park at Sisarma Road 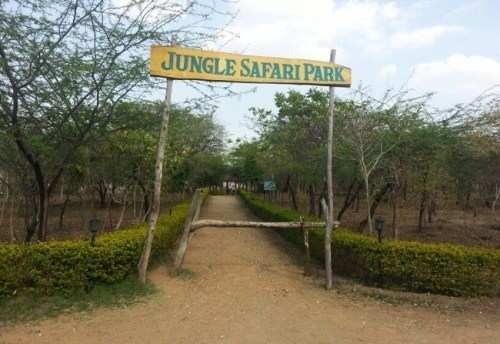 During the old empirical days, this area used to be the hunting abode of kings. Later with the enforcement of Wild Life Protection Act of 1972, protection of wild life and plant species became a necessary step. Following this act, a number of such hunting homes were preserved and then converted into safari parks and were opened for public so that they could see and understand the variety of life on earth, the magnanimity of wild life and the importance of various medicinal plants and trees.

Jungle Safari Park has a 4 metre nature trail where public learns to connect with nature and feel every move of nature. The park’s main attraction is “Seven sisters”- a group of 7 birds. A machaan (watch tower) has also been made in this safari park which gives a view of City Palace, Lake Palace and Jag Mandir. A bird-view point is also available from where aquatic birds alongside Lake Pichola can also be seen. The lake side is usually frequented by birds like sandgrouse, robin, Indian roller, green munia and woodland bird.

Ancient hunting towers built in the safari are also an attraction for tourists since some of the old time drawings can be seen here. This area has been declared as a completely polythene-free zone. Entry ticket for the jungle safari park is 20 rupees but it is free for morning walkers from 6 a.m. to 8 a.m. A cafeteria is also available but it operates only on Saturday and Sunday(information as received from sources).