Bagore Ki Haveli at Gangaur Ghat is the 17th century old historic mansion has its own rich cultural legacy. Once, the private mansion of Rajput royals now turned into a museum, becoming a major tourist destination in Udaipur. If you have visited Udaipur you also have been there but it is quite possible that you might have missed seeing another great attraction inside Bagore Ki Haveli.
Dharohar is a name of a cultural event held every evening 7pm to 8pm at Neem Chowk inside Bagore ki haveli. This event is a musical concert combining 7 traditional Rajasthani folk dances performed every day from last 10 years. 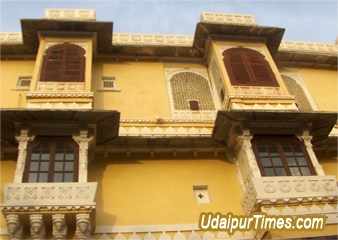 Bagore Ki Haveli at Gangaur Ghat is the 17 th century old historic mansion has its own rich cultural legacy. Once, the private mansion of Rajput royals now turned into a museum, becoming a major tourist destination in Udaipur. If you have visited Udaipur you also have been there but it is quite possible that you might have missed seeing another great attraction inside Bagore Ki Haveli. Dharohar is the name of a cultural event held in the collaboration with WZCC every evening 7pm to 8pm at Neem Chowk inside Bagore ki haveli. This event is a musical concert combining 7 traditional Rajasthani folk dances performed every day from last 10 years. Before a month or so I interviewed a famous stage artist Deepak Dixit on this same blog, while interviewing him I came to know that he is the one who started Dharohar at Bagore ki Haveli, I showed my utmost interest to see the show and one day Mr. Dixit invited me to Bagore ki haveli.

Being an art enthusiast it was a wonderful experience for me to view the show Dharohar, most importantly because it gave me an inner outlook of 7 major traditional dances of Rajasthan one a single platform in just an hour. It was a complete entertainment package. Following are the shows I saw during Dharohar, the  bold one line after each title is a short summary of particular show, in case if you want to skip reading it in detail. 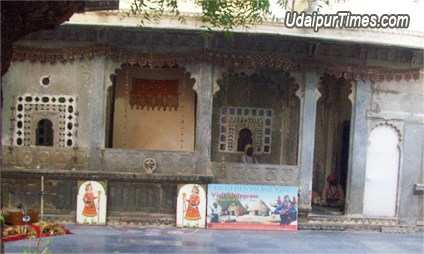 Welcome Song – Show starts by welcoming the audiences in a very traditional manner. A man blows shankh (sea shell) and other beats drum. This followed by a prayer and welcome song sung by a turban wearing man. The cozy Neem Chowk soon turned into a stage of colorfully dressed artists, and the show begins with a welcome note by Anchor Himani Dixit, she commentated well in both Hindi and English languages to give detail introduction of each show. Gavri Dance – Performed by Bheel tribe of Rajasthan, a fusion of act and dance, dedicated to the fight between goddess and demon. 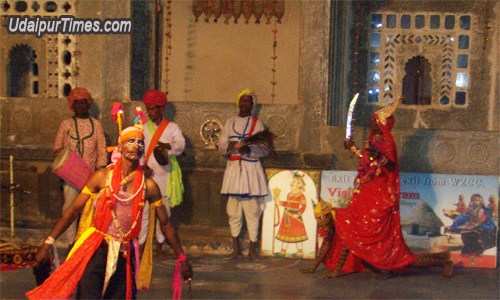 This most popular southern Rajasthani ritual reflects the divine perception of the Bheel tribe. A vigorous fight between Goddess Amba and Demon Bhiamwal shows the conquest of good over the bad. Gavri is a combination of an act and dance. All gavri artists performing at dharohar are ethnic bheel. It makes the show looks real and impressive. Moreover, energetic background music and colorful costumes makes the place full of verve. Chari Dance – Women dancing while carrying ignited brass pot on their heads, traditional dance by Gujjar community of northern Rajasthan . A customary dance of ethnic Gujjar community from Northern Rajasthan, chari/charu means water pot made by metal. Women of gujjar community keep the vessel on their head; often these vessel pots are blazed with cotton seeds dipped in oil. The main skill is balancing these flaming pots on head while dancing. A well choreographed and a great music coming out from bankia (musical instrument) generates a electrifying waves in the audiences. I was completely stunned! Terah Taal Dance – Tying musical instrument manjira on body and playing it in thirteen different style, originates from Kamada Tribe of Rajasthan. 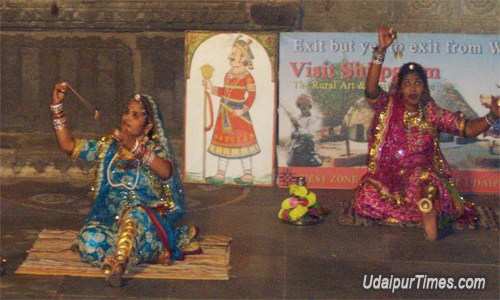 One of the most unique and beautiful Rajasthani dance performed at Dharohar- Bagore Ki Haveli. Terah Taal/Terah Tali means thirteen beats. Originates from Kamada tribe of Rajasthan, it is also performed religiously by devotees of Baba Raamdev temple at Runecha. Dancers tie musical instrument called manjeera on different parts of their body and play it in 13 different styles. It look simple but technically it needs perfection to keep on with the whole dance group. Puppet Show – Sting puppet dance along with music and puppeteer’s hands 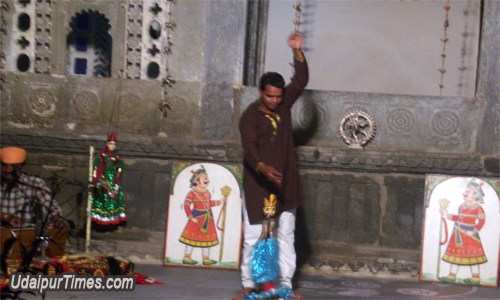 Rajasthani art and music is definitely incomplete without a puppet show, it is the most common entertainment source of Rajasthani people from hundreds of years. Rajasthani string puppet has its own uniqueness and individuality. At Dharohar they have an inimitable concept of puppet dance, generally in puppet shows, the puppeteer always controls the puppet from behind the curtain but here at dharohar both the puppet and puppeteer performs in front of audience which gives equal acknowledgment also to the puppeteer.  I have seen the magician puppet that can even pick his head up detaching it from the torso. That was really funny and entertaining. Gumar Dance – Face covered and colorfully dressed women circle around and dance with the rhythm, a well respected traditional dance of Rajasthani royal families. 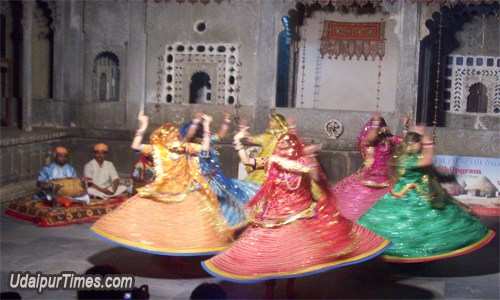 Gumar is identified as dance of Rajasthani royal families; traditionally, Rajput ladies perform this in wedding ceremonies, mostly not in front of gents. Although Faces of women are covered with their gungat (veil) and they circle around a flock of other dancers. Gumar is conceptually adapted from other ethnic tribe of Rajasthan. The dance keep going up in the speed with the rising music leaves anyone excited. At dharohar they play the background music with a famous song “padharo mhara des” Bhavai Dance – a dance represents the gratification of Rajasthani women when she gets water in desert after walking so long keeping so many vessels on her head. Artist also dances on sharp edge of a metal plate and broken glasses 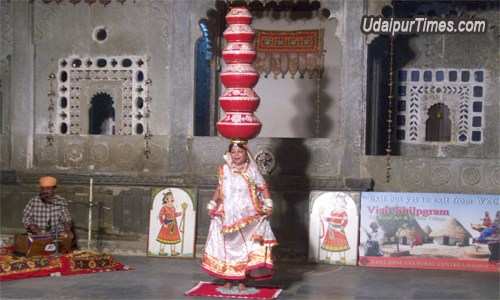 The most thrilling dance performance I have rarely seen in my life. Bhavai dance at Dharohar is the last but the longest performance by a single artist. It was done by an experienced artist. Historically bhavai dance originates from the desert area of Rajasthan where women very often need to walk miles far from their home to get water from wells or oasis. While returning back they used to carry many water vessels together on their head, the joy of getting water certainly made them forget the pain of carrying weight over their head. This happiness is a message in form of bhavai dance. The dancer started the show with one or two pots on her head, in each consecutive break of few seconds she increased the number of pots to 6-7-9, the thrilling part came when she started dancing on the edge of a metallic food plate and then over the sharp cut pieces of glass. Tips for tourists: