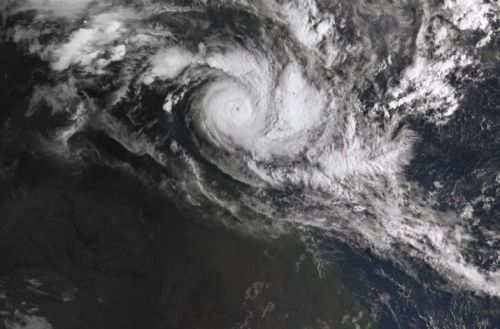 The impact of cyclone “Vayu” could be seen in Udaipur city. With Vayu picking up speed in North-Eastern part of Arabian Sea, Udaipur felt blessed to have rains on Wednesday night. Storm was the ultimate effect of the cyclone which uprooted trees in several parts of the city. The entire day went unbearable with immense humidity and people heaved a sigh of relief after the first spell of long duration rains. The city was in terrible need of this spell.

It was around 8:45 p.m. when winds started blowing followed by a storm which was intense in some areas. Many trees fell down blocking roads and power cut was of course the immediate effect. When the rain started, people were overjoyed though humidity level was too high and power-cut made it unbearable to stay indoors. Initially the winds were so strong that people did not dare to move out of their premises. Many two-wheelers lost balance and slipped on the road. Many people even took to roadside for safety as driving was almost impossible.

As per met department, the cyclone has become active in the coastal areas of Gujarat, hence the impact in Udaipur. It is expected that the cyclone will bring good rain showers in areas of Udaipur, Dungarpur and Banswara between 13th and 16th June. Thunder storms are expected followed by rains in the next 48 hours.

Temperature has gone down to 39 degrees as compared to 42 degrees of Wednesday afternoon. Thunderstorm has also created destruction in some areas as power lines broke resulting in black-outs. For hours, people had to bear with power-cut as transformers suffered technical issues because of lightning. RSEB employees could be seen making efforts to resume power supplies until late night. Since thunder storms and rains are expected in the next 48 hours, people are alerted to stay safe and not make efforts to move out during storm.