Udaipur roads get flooded in 2 hours of rain

Heavy rainfall in Udaipur on Tuesday. Monsoon to hit back within a day or two. 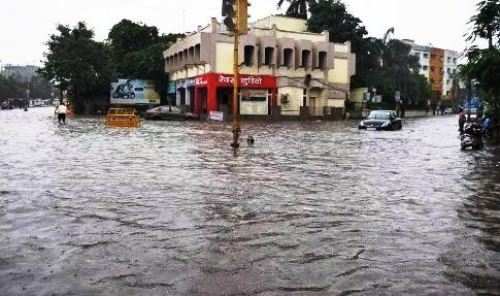 Udaipur city has entered its 5th phase of monsoon and it is likely to rain heavily within 1 to 2 days. The lakes are full and overflowing but the dams still need their share of water. On Tuesday intense humidity was followed by heavy rain showers during the day time which continued until evening in some parts of the city. Almost 1.5 inches of rainfall was recorded during this time which flooded the roads.

As per the local public, areas of Fatehpura and Bedla experienced such a heavy rainfall for the first time. Roads resembled the smaller water bodies covering the pot holes which made it impossible for the masses to drive. Many vehicles broke down, there was traffic jam and it took more than an hour for the traffic to cover a distance of 1 km. The pot holes proved to be quite dangerous as many 2-wheeler riders fell because of these pot holes. The colonies were full of water, shops had water flowing in until late night hours. There have been reports of water oozing out of the tube wells in Badgaon area as the water level has risen to a great extent.

Ayad river is getting constant flow from Gumaniyavala naalah. Both Madars are overflowing. Vallabhnagar dam is getting water through Bedach. On Monday, Fatehsagar gates were lifted by 2 inches and then by 4 inches on Tuesday morning. Since the gates of both Fatehsagar and Swaroop Sagar have been opened, water is speedily flowing into Vallabhnagar dam. Mansi Vakal dam is still in need of water as it is low by 7 metres.

If it rains heavily in the areas falling under Goverdhan Vilas, the low lying areas might face flood like situation as there is no proper system for the passage for water. The area which is likely to be affected to a great extent is Vasant Vihar. Keshav Nagar might also face the same issue as there are colonies in the low lying areas of Roopsagar.

If this condition of flooded roads persists, then the roads will suffer a lot. Wear and tear of the roads creating pot holes can be very disastrous and it has already been proved a number of times. The city’s prominent recreational hub Sukhadia Circle had almost 2 feet of water on the roads by Tuesday night.

As per the met department, heavy rain showers are likely to occur in the coming 2 days. Monsoon has become active once again on the coastal areas of Konkan, Andhra coast and Odisha as well which is certain to bring heavy rains in Udaipur region.