Panther pair on a walk in Gulab Bagh

Panther pair decided to take a walk in Gulab Bagh. 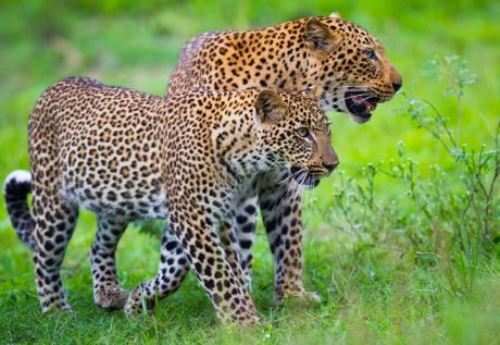 Public visiting Gulab Bagh was terrified on Thursday as they spotted a pair of panther moving about freely. (The pair probably thought of taking a walk to assess why the public loves this garden). People who spotted this pair were so much dumbfounded that they couldn’t speak for a long time. The forest department teams reached Gulab Bagh and kept on searching for the pair until late night.

As informed by the forest officers, they had received news of a panther pair being spotted at Machla Magra hills. Probably this is the same pair and has now entered Gulab Bagh. Public frequenting these areas and the tourists have been asked to stay alert, though there has been no news regarding any attack by the panther pair. Public is in terror as recently there were lots of incidents of panther attacking humans in Tidi area.

Morning walkers had seen the pair and informed others as well. As reported, the pair was seen as early as 3:30 a.m., it stayed there for some time and then left. Later in the evening around 6, people heard the cries of monkeys and dogs and came to know that one of the panthers had grabbed a baby monkey.

The forest department could not trace any panther as the garden has tar road and tiles hence no pug marks. Normally the panthers frequent this area only in search of water. The other areas in town where panthers have been spotted prior to Thursday are Rani Road, Dhikli (ahead of Pratap Nagar), Shikarbadi area, Chitrakkot Nagar, MLSU Campus and even Transport Nagar.