The work began with a (motor)bike ride to Pichola Lake. When we arrived, there were a lot of reporters and students standing around the lake; in the water, a mysterious object under a red cloth was waiting to be revealed 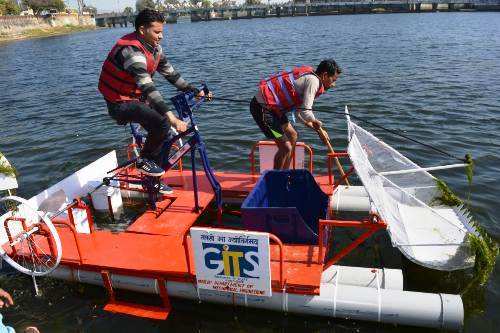 Walking into the Udaipur Times office, I didn’t know what to expect from my first day on the job as an intern. Would I be sitting at a desk writing articles all day, or shadowing a reporter at the office perhaps? Would I be sent to bring people chai with nothing to do all day? As it turns out, working for an online news website requires a lot of traveling around to press conferences and the like. And so my first assignment was to go along with a reporter to two press conferences happening that day, to “cover” the story, which meant, to observe and take notes, and get a feel of the work reporters do.

The work began with a (motor)bike ride to Pichola Lake. When we arrived, there were a lot of reporters and students standing around the lake; in the water, a mysterious object under a red cloth was waiting to be revealed. 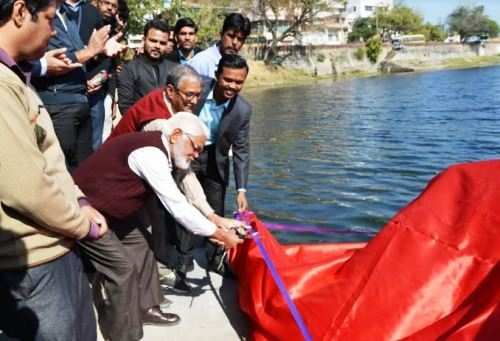 Behind me, a backdrop was being set up that had the words “Geetanjali Institute of Technical Studies’ (GITS) written on it. After talking to Mansoor, the reporter who I was accompanying, I was clued in on the event taking place.

Everyone gathered was here for the launch of a ‘lake cleaning machine’ built by students from GITS. A few reporters came up to Mansoor and started talking to him about politics and the like. This is what its like to be at work for reporters, I thought – seeing familiar faces around and sharing news stories with each other. 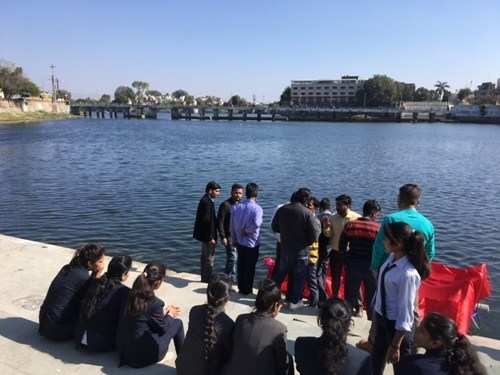 One news person asked which news platform Mansoor was representing and he said ‘Udaipur Times’. When somebody asked me the same question later on, I answered it the same way. The students also decided to cover the event by taking pictures and videos of the event and sharing it on social media. We waited around for about half an hour before the guests of honor showed up, and the inauguration ceremony commenced. Among the distinguished guests were the Head of the Department of Mechanical Engineering at GITS, and the District Collector, Bishnu Mallick.

While interacting with those present, the Collector spoke about how through trial and error, the students plan to improve the machine and create new models. “They wish to change people’s attitudes about throwing trash around in the first place”, he added. 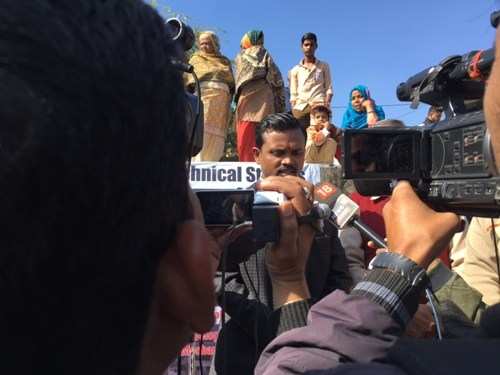 It was such a different perspective to be among all the reporters, holding up my phone camera, in the midst of all the action, rather than on the other side of a TV or computer watching the news. One reporter also enquired the cost to build such a machine – the Department head said that they used scrap material, and that the total cost came to around Rs. 35,000.

During an interview with a student from GITS, he explained the mechanics of the machine and their plan to take this project forward, saying they plan to motorize the machine. When the time came to demonstrate how the machine worked, everyone rushed to the scene. I managed to catch a glimpse of the action through gaps between people’s heads. 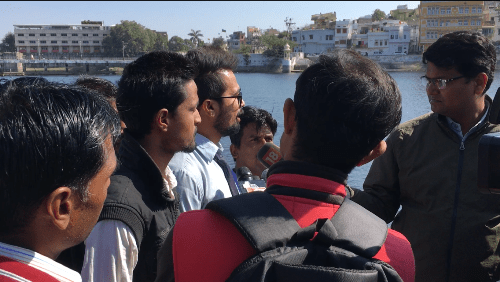 There were two people operating the machine: one was cycling, one was taking the weeds and plastic, collected by the big claw in the front of the boat, and putting it aside to be thrown. It was an uncomplicated design from the looks of it: a boat, a cycle to power it (as you pedal, the boat moves forward by spinning a wheel on the side of the boat), and a scooper in the front to catch any plastic on the surface of the water.

Once the interviews and launch was over, there was one final group photo of all the students from GITS, and the students from the Mechanical Department who worked so hard on this for their city. After that, the honored guests were escorted back in police vehicles. Mansoor took pictures of the event and would use the press notes to write the story later on. 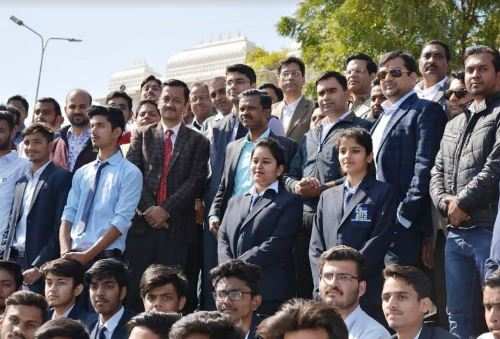 An hour or so later, I accompanied Mansoor to the second press conference. This one was more like what I had first imagined a press conference would look like: a room with a panel set up in the front, and chairs for the reporters and other guests to sit at. Behind the panel was a backdrop with the words, “Geoscientists Society of Rajasthan”. 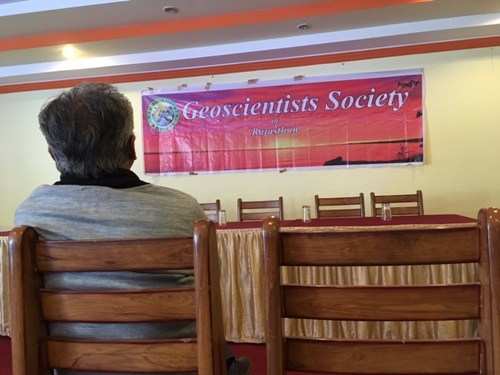 A pamphlet was handed out about a “national seminar on growth potential of mineral resources of Rajasthan and challenges faced by the mining sector”, which sounded pretty complex and specialized to me. 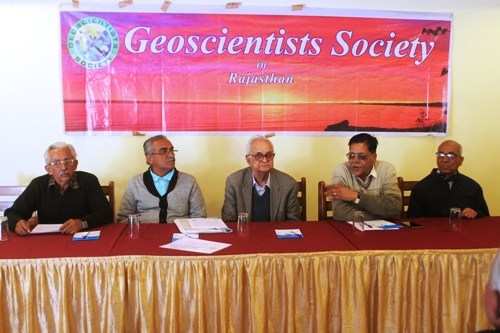 The speakers spoke for a while on the national seminar, happening in a few days, and then the representatives from different media teams asked their questions, and took photos and videos of the event. When we arrived back at the office, Mansoor sat down to write about the day’s events, using the press notes that would be sent to him, along with the pictures and observations’ he had.

Neha Panda is a 17 yr old student from Bangalore.  She is on an internship with Swaraj University  (Shikshanter) in Udaipur and as a part of her program, is interning with UdaipurTimes.