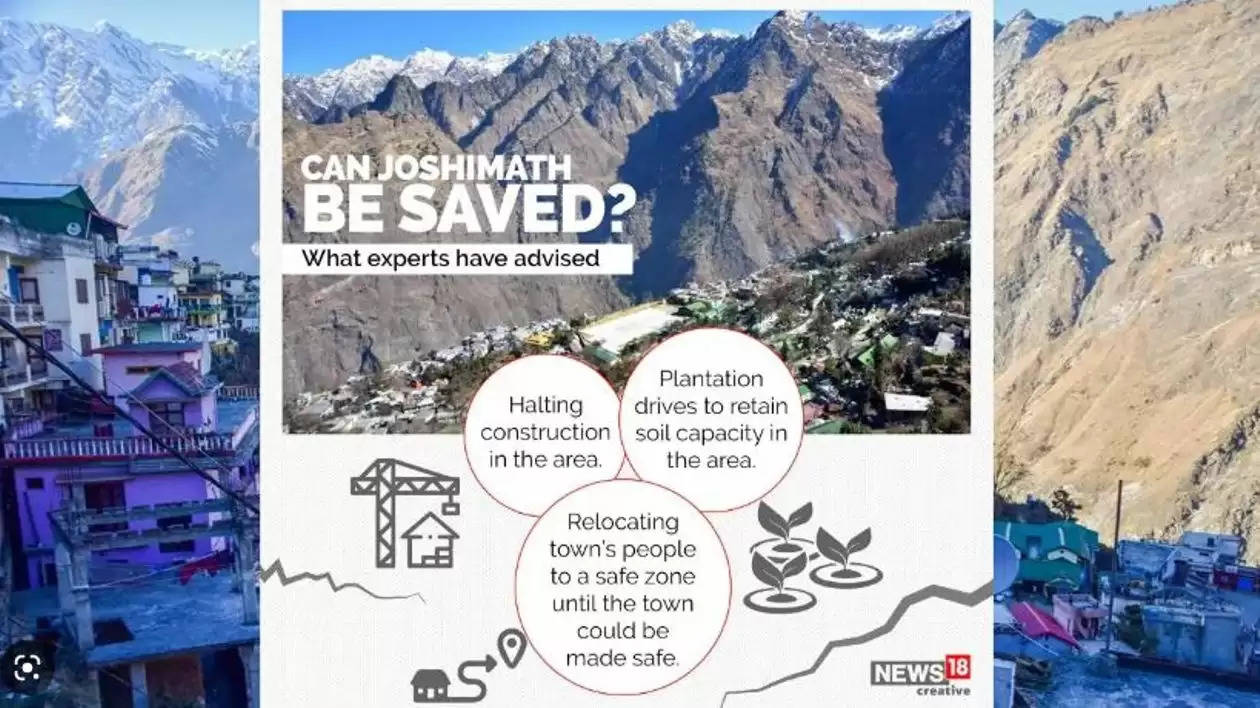 Today's Joshimath scene includes significant constructions, illogical land design, and natural disasters caused both by humans and by nature. The appearance of cracks on several roads and residences across Joshimath as a result of ground subsidence is neither a recent phenomena in the area nor one that can be reversed. While such cracks have been seen in and around the town for a while, experts believe this time they are deeper than ever, adding to the rising alarm.

What is the government doing?

Uttarakhand Chief Minister Pushkar Singh Dhami toured the afflicted regions and highlighted rehabilitation and relief work after the Joshimath earthquake, which caused fissures in the roadways and more than 600 dwellings in the important tourist transit town.

To assist the affected families with their rent payments, the state government has approved Rs 1 crore from the Chief Minister's Relief Fund. The people whose homes are not safe to reside in will get Rs 4,000 as rent for the upcoming six months, according to an official statement. So far, some 50 families have temporarily relocated to homes in safer areas, and more are expected to move as well.

Who is to be blamed?

Well, there are many conflicts around land subsidence. Although it is obvious that the tragedy of Joshimath has been profoundly impacted by both political and man-made calamity. Years ago, no efforts were made to stop the cause because of the character of Joshimath's land. It's often believed that one won't understand the consequences until they've been dealt with personally.

Dhami further urged people not to play the blame game over the problem given that it has recently sparked protests in Joshimath and the congress is criticizing the BJP government.

At Joshimath, the task of demolishing the affected hotels begins

The authorities have begun the process of demolishing the two hotel buildings in the town that have been designated as being in a risk zone despite complaints against the demolition of impacted property without a guarantee of compensation.

"There are around 200 hotels and homestays in Joshimath and Auli combined. Around 40 per cent of these were either constructed or expanded after 2015 before the Covid period." - Sobat Singh Rana, Chamoli district tourism officer

According to ISRO Satellite maps

Joshimath village saw a quick subsidence event, according to a preliminary study issued on January 13, 2023 by the National Remote Sensing Center (NRSC) of the Indian Space Research Organization. Since December 27, 2022, the region has fallen by almost 5 centimeters in just 12 days, according to ISRO.

Another reason is the railway station, which is part of the ambitious proposal to build a wide gauge link to Badrinath. The town has also grown unintentionally, mostly to accommodate the influx of pilgrims and visitors that keeps growing.

Joshimath and its land affecting factors

This area's soil is fragile and largely made up of debris from landslides. There are numerous sediments, moraines, and loose soft rocks. Therefore, the soil is not suitable for massive structures. Additionally, because the region is in a seismically active area and frequently trembles, the top soil is unstable.

The current state of things is a result of unplanned construction, population pressure, tourism infrastructure, restriction of natural water flows, hydropower projects, and development activities. The report of an official committee that highlighted the risks of uncontrolled growth in this region was the first to sound the alarm 50 years ago. Since then, several studies have been published that raise the same issues.

Major infrastructural development has occurred as a result of the region being a tourist hotspot for at least three significant shrines: Badrinath, Hemkund Sahib, and Shankaracharya Temple.

The issue has gotten worse due to a lack of regular drainage. Water has frequently had to find alternate pathways because of unchecked development getting in the middle of the natural flow. When water is prevented from following its normal route, it builds up pressure either above or below the earth. Additionally, there are several other subsurface pressures present in this area in the form of tectonic forces.

Angry residents protested against the tunnel

The business asserted its 12.1 km long tunnel had nothing to do with the most recent land concern . On January 5, the construction was halted at NTPC's MW Tapovan Vishnugad hydro project as a result of angry protests from Joshimath residents when cracks began to emerge around the town.

Senior central government and Uttarakhand State Government Officials, as well as representatives from the National Disaster Management Authority, the Geological Survey of India, and the National Institute of Hydrology, were instructed to take a "whole government approach" in a high-level meeting called by PM Modi's office.

The strategy aims to control the crisis brought on by Joshimath's land subsidence, carry out ongoing seismic monitoring, create a time-bound rebuilding plan, and create a risk-aware urban development plan. A 350-meter-wide strip of land is damaged, according to an assessment of the circumstance made by specialists.

Continuous seismic monitoring must be done together with the preparation of a defined, time-bound rebuilding strategy. A risk-sensitive urban development plan for Joshimath should be created using this opportunity.

The local government in Joshimath started demolishing the damaged hotels on Thursday. Locals worry that several hotels in the vicinity might soon fall since they have developed cracks. At Karnaprayag, some 82 kilometers from Joshimath, road fractures and home wall fissures have mostly gone unnoticed for the past ten or so years. Now when the fissures and breaches are broad and long enough, the owners and renters of numerous homes are forced to move out.

As per the current update in a high-level discussion, Amit Shah evaluates the situation in Joshimath; State government announced a rehabilitation programme at Rs. 45 crore; CM Dhami examines the refugee camps.