On Marriage and Secularism

we find that almost the same ideas of love, togetherness and accepting 'the other' make us an inclusive and, more often than not, happier beings through the short span of our lives— as individuals, as a family, as a friend or co–worker, as a nation and as a State and a Country... 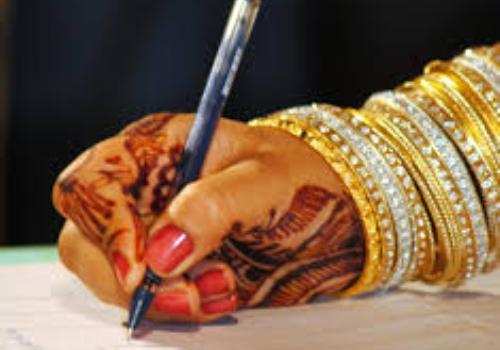 On a rainy evening in August, my sister informed that some of our very dear family friends turned a general political discussion on social media into an uncivil discourse on the inter–religion marriages and the secular beliefs and practices of our family. I had found such transformation in some of my very good friends in the past six years, and particularly within the past six to twelve months. This can be attributed to an ever–expanding divisive and delusive narrative, and the lack of any alternative narrative whatsoever. This made me look at the ideas of secularism in relation to marriages with examples from my own family—the maternal on.

In the known authentic history of my maternal family, my mother was the first to have an inter–religious marriage. Then, her youngest sister’s marriage was an ‘inter–caste’ (Shia-Sunni). Her three nieces did not shy away from inter–religious marriages either. All of them, from my mother to my youngest cousin, registered their respective marriages in the Court, and most of them performed Hindu and Muslim rituals. One of my cousin-sisters and her husband also performed the Christian marriage rituals at the behest of their friends.

Why did they not follow just one religious ceremony or just register at a court and be done with it? The answer is that for them coming together of two individuals was a joy. It was a matter of including and being a part of not just the one you love but also hers and his concentric circles of the extended families, relatives and friends.

As their love is of a person who could see beyond the tags of caste and creed—which the society ties to our psyche since childhood, to accept ‘the other’ and ‘the others’ as well— that comes with the embodiment of your love, and to stand with each other. Therefore, they were happy to perform the ceremonies in ways in which relatives and friends would feel happy about. They neither sought acceptance nor a false smile but the sheer joy of togetherness—of being and of becoming. Each of these couples have lived and shall continue to live a life of love and happiness verily going through all the vicissitudes faced by any other couple.

In this light, shall we have a look at secularism in the following five ways?

An Individual’s Secularism would be to look at the other individual not through the artificial lenses of caste and creed etcetera but as a human being having her or his own ideas and ways of going about life, and everything which constitutes a living. It is also to give a leeway to those who are rigid on certain ideas, and to contest them, of course, but not to harbour an ill feeling or to make it a fight to the finish.

A Family’s Secularism would be to welcome to its folds new members, whether born or betrothed, and continue with the differences of opinions over a cup of tea or two. It would also mean, on the one hand, to suggest to its members to follow its customs and traditions, and on the other, to give liberty and freedom to decide whether they wish to do so, or to what extent and in which ways, all the while assuring them that ‘the family’ respects and stands with their choice.

A Classmate’s, Co-worker’s and Friend’s Secularism would be to understand the ideas and practices of one’s friend or co–worker. One would offer something — an invitation to a socio–cultural–religious programme, a particular food, a greeting or a friendship band etcetera — in a considerate manner giving respectful and comfortable space for one’s friend or co–worker to turn down the offer. Disagreements can always be discussed in a civil way with relevant facts and figures while avoiding to create a charged atmosphere especially when one’s friend or co–worker has a minority view. It would also require a conscious effort in getting rid of the notions, which attach certain terms and phrases based on caste, creed, region, colour, gender, body built or specific physical condition, disability, pronunciation, economic circumstances or financial situation, ownership, dress up, food habits, choice of commuting, hobbies and lifestyle in general etcetera. One might say it in a jovial mood and think that the person to whom it is referred would take it in the same stride but it seldom happens. The fellow being targeted, especially if in a minority, often pretends that such comments do not affect, but is it so?

A Nation’s Secularism would be to give confidence, and time, and space to each and every community and sub-groups so that they are assured of being an equal member of the nation. The feeling of equity and togetherness should grow progressively within the new generations in such a way that they evolve a resilient culture of their nation (and the nations within a nation), all the while being open to new ideas and new people.

A State’s or Country’s Secularism would be to look at its citizens, collectively or individually, as human beings only, and with a view that is devoid of caste, creed, region, gender, and designation or economic status. A State is perhaps the most powerful form of a man–made structure (termed as ‘man–made’ because there is hardly any input of women asked for, taken or accepted in the idea of a State— throughout history and across the globe). A State can determine, and take a complete U-turn if it so wishes, on what is legal. Its structured might can seldom be resisted within its jurisdiction, which it can re-define through its military and economic powers and according to its ideological or idiosyncratic drives. Therefore, in this era of ‘Country States’, the assurances of a State— via its actions in the public eye, its acceptance of each and every citizen with equal warmth and opportunities, and its stand with and a desired push to the underprivileged and those with a minority view —mean more than anything else to its people. Conversely, the same State wreaks havoc when it begins to distinguish and to favour a few based on divisive and delusive ideologies or idiosyncrasies. The State machinery as well as the brainwashed outfits bring devastation, corner the minority views (even if people with minority views largely fit into their profile of a fellow citizen) and put the country on a decades long path of mistrust, of shredded social fabrics, and of psychological and physical violence. Once such conditions take to center stage, they often affect several generations.

In conclusion, we find that almost the same ideas of love, togetherness and accepting ‘the other’ make us an inclusive and, more often than not, happier beings through the short span of our lives— as individuals, as a family, as a friend or co–worker, as a nation and as a State and a Country. However, in practice these are high ideals to aspire for and to uphold with continuous introspection and subsequent reformation and practice, and though at times to die for but mostly to live for.

Himalay Tehsin is a freelance translator and copyeditor.