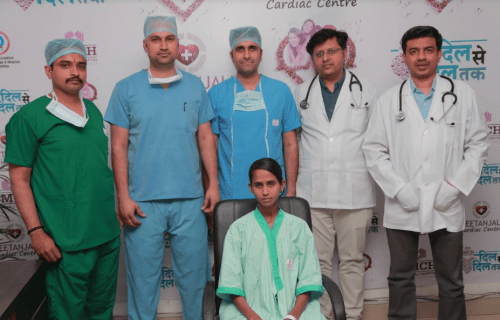 She had a potentially life-threatening condition called, Extra Hepatic Portal Vein Obstruction (EHPVO), blocking the blood flow between the intestines and liver. She was then operated by removing the enlarged spleen by performing surgery named “Proximal Spleno Renal Shunt with Splenectomy (PSRS).”

“With only 6 grams hemoglobin and a low TLC count & platelets she was recommended for surgery. As the spleen was enlarged to such an extent, the hepatic portal vein transporting blood containing vital nutrients from intestines, where food is break down, to the liver for further digestion was blocked. Blockage or reduced blood flow through this major vein can lead to malnutrition, bleeding and death. This blockage leads to initiation of small veins to carry blood into liver with high pressures. This medical condition is termed as Asymptomatic Portal Biliopathy,” said the treating GI surgeon Dr. Kamal.

A corrective procedure was then alleviated in which the artery of spleen was closed. As soon as the artery was closed, the blood in the whole body was circulated through splenic vein which made the hemoglobin raise up to 11 grams and the surgery was carried without any blood transfusion. This vein was then transplanted into renal vein and normal blood flow was reestablished allowing the blood to flow normally between the intestine and liver. The patient recovered well and will have normal growth without any complications of Jaundice and bleeding in any part of body and the pressure on bile duct will also be reduced.

Dr. Kamal Kishore told that, “The spleen plays multiple supporting roles in the body. It acts as a filter for blood as part of the immune system. Old red blood cells are recycled in the spleen, and platelets and white blood cells are stored there. The spleen also helps fight certain kinds of bacteria that cause pneumonia and meningitis. In many cases the children delivered at home are likely to have this disease as the umbilical vein opens in portal vein which may cause infection resulting in EHPVO. They also suffer with a problem of growth retardation”

CEO Geetanjali Medical College & Hospital Prateem Tamboli congratulated the whole team over such a complicated yet successful procedure. He also said, “Geetanjali Medical College & Hospital is a hospital having all the super-specialty services available under one roof where such procedures can be done successfully. This case required a Multi-Disciplinary approach which was handled by the team of experts saving the life of a young girl. It’s indeed a matter of great pride & We wish a bright future and good health to the young girl.”