Beginning 8am till 5pm on 14th and 15th July, Internet services will be unavailable in Udaipur district 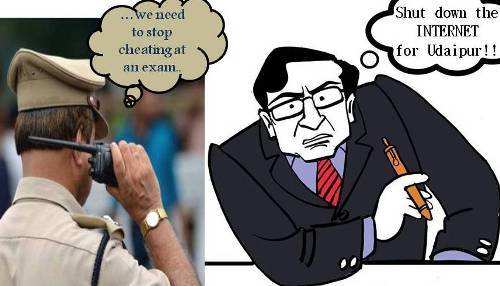 Beginning 8am till 5pm on 14th and 15th July, Internet services will be unavailable in Udaipur district.

This order was communicated by the office of the Divisional Commissioner of Udaipur, today on 13th July.

The premise for such a decision is the Rajasthan Police Constable Recruitment examination, which is being held on both the days.  Administration has been made aware of possible leakage of the examination papers and mass copying during the examination by an organized group.  In order to control the situation, the Administration has very conveniently decided to shut down Internet services.  Hats off to the Smart City purpose.

Police department had earlier requested the administration to control the internet usage across the city of Udaipur, Dabok, Debari and Umarda.  The Divisional Commissioner was of the view that shutting down the internet will be a proactive step in the controlling instances of cheating during the examination.

Earlier, the Superintendent of Police, Udaipur had suggested that the administration will attempt at shutting down services in specific areas where the examination is being held, however, since there are many centers, it is possible that services across the city be shutdown.

56,928 candidates will be appearing for the examination.  The centers have been equipped with mobile jammers and CCTV cameras.

In his order, the Divisional Commissioner has sought cooperation from all providers and has taken into cognizance the orders of the Home Department (Group 9)/35(1) Home-9)/2006 Pt. Jaipur dated 2nd September 2017 under which it has been permitted to suspend telecommunication services if needed for situations of public emergencies and public safety.  This order does not cover lease line services.