Farmers returned disappointed from the Pushkar Fair at Ajmer, as the Lumpy Skin Disease forced administration to ban cattle at Pashu Mela

'Pashu Mela'&nbsp;at Pushkar not as expected; many farmers return disappointed

'Pashu Mela' at Pushkar not as expected; many farmers return disappointed 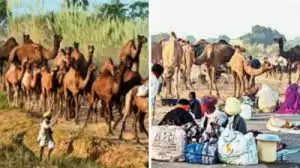 Due to lumpy skin disease, the State government forbade most types of cattle from participating in the Pushkar Fair. As a result, around a thousand persons including farmers and their families who had traveled hundreds of miles on foot or by camels were forced to set up camp 5 kilometers away from fair's premises on the Ganheda-Motisar road. Chief Minister Ashok Grehlot officially launched the International Pushkar Fair on Saturday, October 30, 2022. Police officers were stationed on the Pushkar border to make sure camels did not enter.

Farmers were disappointed, claiming that they were not informed of the changes. They said that they ought to have been stopped at the Ajmer district border. Farmers had hoped for better camel trading after the two-year COVID restriction but the fair was not in their favor. “We have nothing to return back or to survive in the sand dunes, I wished to sell my camel to return home with some money", said a farmer, Prakesh Meena who had come from Jalore.

The furious farmers claimed that the administration had mistreated them. Lalit Dayma, a cow broker, claimed that while the cattle were banned from participating in the fair, a card announcing the start of "pashu mela" was also printed.