The 52nd Dai-ul-Mutlaq (Missionary with Absolute Authority) of World mainstream Dawoodi Bohra Community Sayyedna Mohammed Burhanuddin (A.Q.) passed away in Mumbai on 17th January 2014 due to heart attack at the age of 103 years (as per Hijri or Muslim Calendar) and 98 years as per Gregorian calendar. 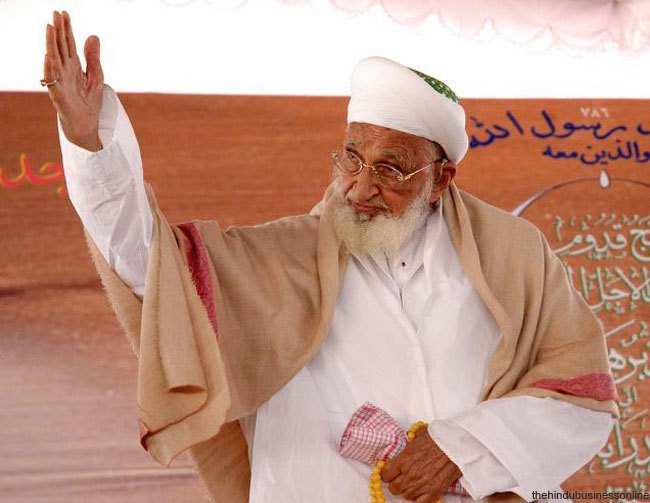 The 52nd Dai-ul-Mutlaq (Missionary with Absolute Authority) of World mainstream Dawoodi Bohra Community Sayyedna Mohammed Burhanuddin (A.Q.) passed away in Mumbai on 17th January 2014 due to heart attack at the age of 103 years (as per Hijri or Muslim Calendar) and 98 years as per Gregorian calendar.

The Bohras are a sub sect of Ismaili branch of Shia Muslims and are called Shia -Mustali-Taiyabi Ismailis. They are more than a million strong closely knit community scattered throughout the world with concentration and seat of authority in India. 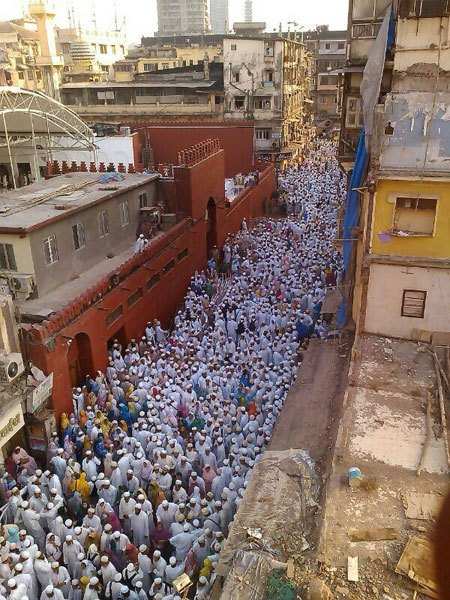 Born as Mohammed in Surat, Gujrat on 6th March 1915 A.D. (Corr. 20th Rabiul Akhir 1332 A.H.) Sayyedna Burhanuddin succeeded his father Sayyedna Tahir Safuddin (A.Q.), the 51st Dai-ul-Mutlaq on the latter’s death in 1965. Thus he has been the religious head of the community for close to half a century. 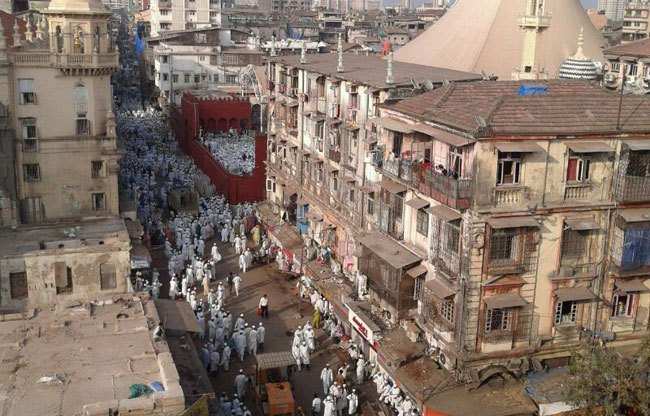 The Dais in Bohra community are nominated by the reigning Dai by a process known as Nass-e-Jali (Un ambiguous declaration) and Burhanuddin Saheb was so nominated at the age of 19 years. 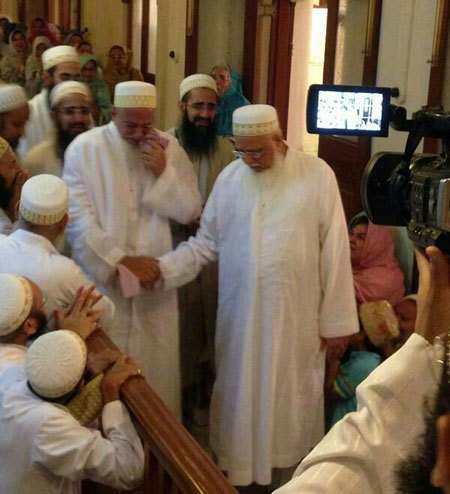 The chains of the Dais began in Yemen, Arabia after the fall of Fatimid Caliphate in Egypt and 23 Dais continued their missions in Yemen and there after the seat shifted to India from Yemen. Sayyedna Burhanuddin was thus 29th Dai-ul-Mutlaq of the Indian order (Silsila). 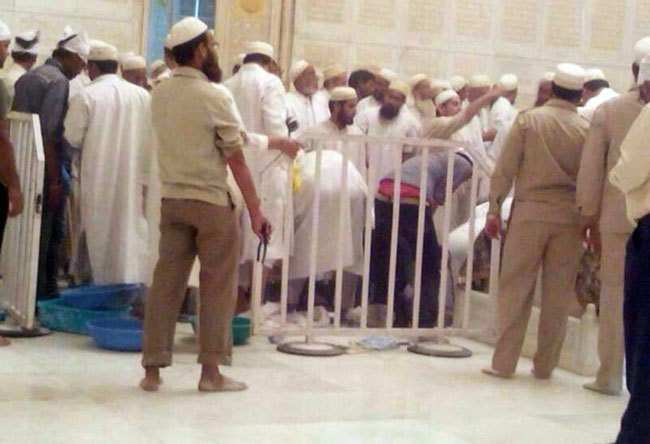 His ladder to higher status started at the age of 15 when he performed his Haj pilgrimage, gave his oath of allegiance (Misaq) and got the laqab (title) Burhanuddin by his father along with the rank of ‘Sheikh’. In 1934 he became Mazzoon–e–Dawat (Legatee) and nominated as next Dai. 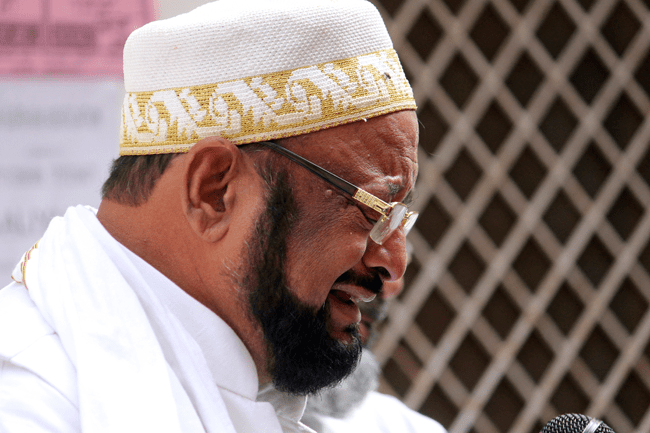 He was very learned in religious as well as other sciences and was a Hafizul Qura’n (One who could recite the whole of Qura’n orally)-a rare achievement amongst Bohras.

In 1961 he visited Yemen and as a result the Bohras could visit the mausoleum of their earlier Dais and in 1965 he was conferred the title of ‘Mansoor-ul-Yemen’ by the 51st Dai. 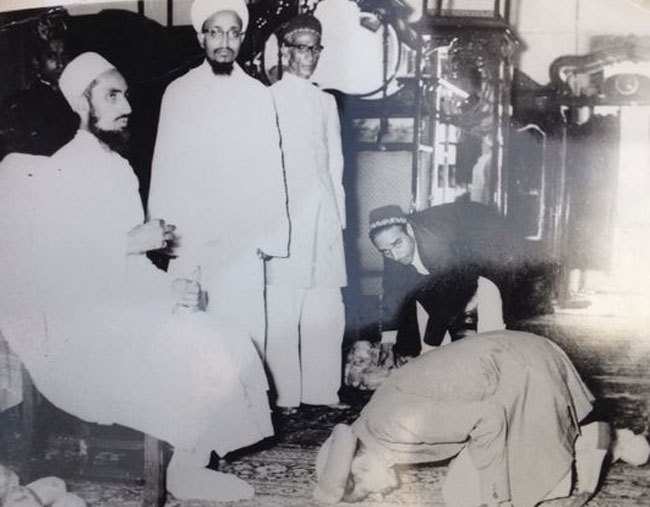 Founded by the 43rd Dai Abde Ali Safuddin in the early 19th century as a seminary it was transformed into a University by the 51st Dai Taher  Saifuddin (A.Q.) in 1920 and made provisions for the education of girls students also.

It is an Islamic Arabic learning centre with a branch in Karachi, Pakistan. Following in the footsteps of his father Burhanuddin Saheb encouraged education both religious and secular irrespective of gender. Many schools and colleges had been established with the result that the literacy rate in Bohra community is almost hundred percent. Despite being basically a community of traders, the Bohras could boast of encompassing every field of learning. 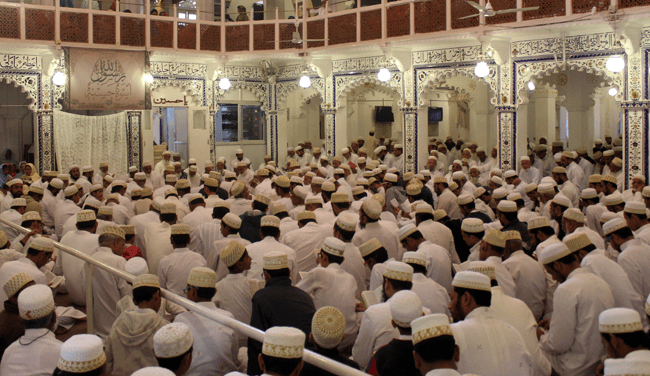 In 1999 he became Chancellor of Aligarh Muslim University. In 1976 Burhanuddin Saheb addressed a gathering in the historical Royal Albert hall, London and in 1982 he addressed International Islamic Seminar probably at Colombo.

Burhanuddin Saheb’s reign will also be remembered as an era of wide spread construction of masjids, mosoleums and community buildings throughout Bohra centres around the world as well as renovations/rebuilding of their historical places.

Raudat Tahera in Mumbai is an outstanding example of such construction. Space and time constraint do not allow their listing. Suffice it to say that they have been highly appreciated and have generated a sea of goodwill for Bohras among Muslims.

On the social side his ambitious redevelopment project of Bhindibazar area in Mumbai is a unique adventure in the history of redevelopment in India.

This project is being implemented under the aegis of ‘Saifi Burhani Upliftment Trust established by Burhanuddin Saheb with all modern facilities for the living and commercial buildings. People other than from Bohra stock would also be benefited.

Also on the occasion of his 100th Birthday a record 52,000 specially designed sparrow feeders were systematically distributed across the world on his behalf which finds its place in the Guinness World Record. These are just examples-the list is however, long.

His position, learning and works have brought many a laurels to him some of which includes:

Doctor of Theology from Aligarh Muslim University, Doctor of Literature from Karachi University and Doctor of Islamic Sciences from Al-Azhar University Cairo Egypt.

As per the tradition, he has delivered Muharram Vaizes (Religious sermons during the first ten days of Islamic month Muharram in memory of martyrdom of Imam Husain A.S.) all around the world and as a result when in the year 2000 he went to Australia he became the first Da’i al-Mutlaq to have traveled to five continents.

Sayyedna Dr. Burhanuddin Saheb last visited Udaipur in the year 1998 as a state guest and had blessed his followers.

On his demise the Bohras have lost one of their illustrious religious leaders and a benevolent individual. The Bohras call their Dais ‘Bawa Saheb’ meaning spiritual father. That he was.

In Udaipur the Bohras as per the report would mourn his passing away for three days and are gathering in various mosques to recite the Holy Qura’n and paying homage to him.

As per another report his body will be placed in rest at the mausoleum of 51st Dai Sayyedna Tahir Saifuddin Saheb (A.Q.) in Mumbai a.m. 18th January 2014.

May Allah, The Almighty, Bless Burhanuddin Saheb’s soul with His Rahmah and give his soul a place with His chosen ones. Amen!