RK Marble, India’s leading marble company was awarded the GRAND STAND special jury award at the The Economics Times - ACETECH 2017 hosted at Pragati Maidan, New Delhi from December 14 to December 17, 2017 in which it participated as an exhibitor RK Marble, India’s leading marble company was awarded the GRAND STAND special jury award at the The Economics Times – ACETECH 2017 hosted at Pragati Maidan, New Delhi from December 14 to December 17, 2017 in which it participated as an exhibitor. 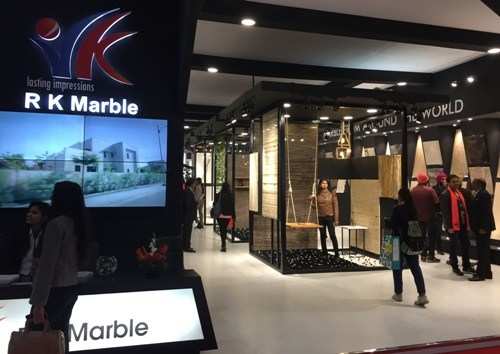 Among the various participants both from within and outside the sector, RK Marble stood tall with the versatility of designs and amalgamation of class and luxury and because of its stylish yet elaborate stall design at Hall # 14.  The award was given at the concluding ceremony of the exhibition on December 17, 2017.

“This win is a good and important morale booster and this award is the reflection for the hard work which the team has embedded into the exhibition. The team is excited and yet dedicated to perform even better for the upcoming events and exhibition” Energized and boosted with the win, Guptafurther spoke about the design and display of marble at this exhibition.  He said, “We had three sizes in our thought process and in the initial planning we had imagined the exact design which we displayed in here. Although we were very careful about the structure of design as the marble slabs are heavy in nature and the design can make them fragile and in like manner the transportation and logistics make the job a bit difficult and tricky but eventually it ended up upright when the execution and planning was up to the mark”.

When asked about the future events and exhibitions, he said, “In the month of January’ 18, we’re heading towards Hyderabad with The Economics Times – ACETECH and as of now that will be the last destination for us with ACETECH as it concludes for the season at Hyderabad. This award gives us a bit more responsibility as we’ll be the center of attraction with every eye gazing at us”.