Claire Abrams (born on September 2nd, 1989) is an animal lover and social activist. She is the co-founder of a charitable organization named Animal Aid Unlimited at Udaipur, India. She commands this NGO by her love and compassion towards ownerless street animals. She is an American but speaks fluent Hindi. 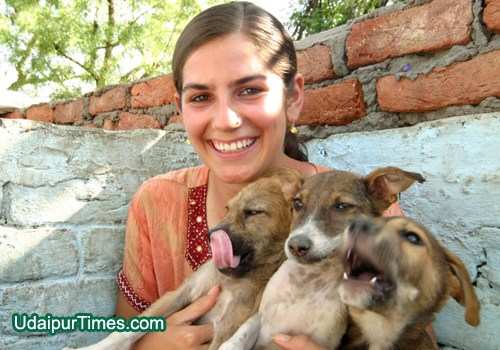 Claire Abrams (born on September 2nd, 1989) is an animal lover and social activist. She is the co-founder of a charitable organization named Animal Aid Unlimited at Udaipur, India. She commands this NGO by her love and compassion towards ownerless street animals.  She is an American but speaks fluent Hindi.

Personal Life   Claire was born in Melbourne, Australia, the daughter of Erika Abrams and Jim Myers. She was brought up in Seattle, USA, which is her hometown. Her childhood was spent in Seattle till she was in 9 th standard after that her family shifted to Udaipur permanently. After coming to India, she completed her education up to 12 th standard by self-study in India and appearing in examinations in USA. Before founding animal Aid, her mother Erika Abrams was a professional writer, a marketing consultant, and her father Jim Myers was a professor of English literature in American Universities and public relations consultant to NGOs. 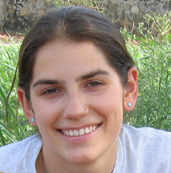 Claire wanted to be a professional football player in her childhood when she was in U.S. however, when she came to India, she started developing a soft corner for street animals in influence of her parents. Earlier when they were living in a hotel that would not allow cows to come into their yard because they would eat up the grass, she used to let one special cow in when managers were away. In her words, “I got a lot of time to think, to read books and to find out exactly who I am”.

She loves to sing in her spare time and consider every person as her friend who cares for animals as they have same devotion for the voiceless creatures.

She came to India with her parents in early 90s as they loved India particularly Udaipur, in terms of culture, people and animals on street. They decided long back that they would live in Udaipur for rest of their life.

After seeing peace and beauty of Udaipur they decided to raise Claire in India away from materialistic and violent scenario of their native nation. Since then she is living in Udaipur nurturing her parents dream in name of Animal Aid Unlimited, a stray animal hospital and shelter home. Being a daughter of pet-lover parents, she devoted her life to make life of street animals comfortable. She finds solace in working for these meek creatures day and night.

Before starting Animal Aid Limited, Claire lived with her parents in a Guest House at Chandpole, Udaipur. Claire’s parents loved the beauty of Udaipur and started exploring the city and interest of people there. Claire’s father being retired was planning with her wife to do something for the society. Mrs. Erika being a pet lover and after watching situation of ownerless animals in Udaipur decided to heal and take care of animals. 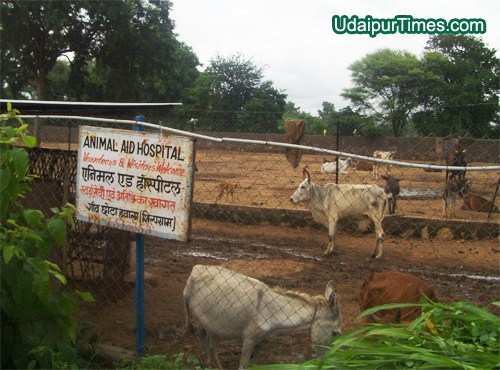 Claire’s family always used to love animals; they had cats in their home since she was born. But the idea struck to start the hospital and rescue-centre (Animal Aid) when they saw the condition of street animals all over Indian cities and Udaipur. They observed that there was a government hospital-serving farmer for dairy cows and goats, but there was no hospital for street animals. Street animals in India are left to die on the streets when they are hit by cars and injured by humans or made sick by the human waste clogging the roads and rivers in India.

Claire’s parents founded Animal Aid Unlimited in 2002. It is a U.S-based charitable organization that runs a full of activity animal hospital and shelter in Udaipur, Rajasthan, India, where ownerless street animals are rescued, healed, loved and returned to the neighborhoods from where they came.

With a subsequent guidance from Humane Society International (HSI) under their HSI Animal Advocate program for 5 years they gained appropriate knowledge for this one of the best animal welfare group in India.

Initially, they began by rescuing injured animals they could find and bringing them to a room in their house. They treated them as best they could with help from the Udaipur polyclinic doctors. Soon their house was full of animals so they rented a small piece of land in Chota Hawala village, that was back in 2002. They hired their first veterinary doctor, Dr. Saket Pathak, and later they started receiving a few calls a week from Udaipur locals to report injured animals.

As they do not have any medical background they had to learn a lot in order to provide the expert care that the rescued animals need. They worked with local doctors who had very little experience of treating stray dogs so they made many efforts to get them trained at different locations in India.

They received guidance from other animal hospitals in India such as “Help in Suffering “of Jaipur who gave training to their doctors in surgery and medicine.

They also received great support from Udaipur locals from the very beginning. Many Udaipurites calls Animal Aid to report suffering animals and According to Claire, this is biggest support that animals in Udaipur can receive.

Badi Center is situated on 88,000 Sq.ft. land at Badi, Udaipur, where around 250 animals resides per day.  Animal Aid pays Rs.35,000 per month for this rented land. It has room to house 50 dog patients suffering from wounds, illness or accidents and separate kennels for 25 dogs suffering from the skin disease Mange. It has a paddock to shelter cows and donkeys. Currently about 80 cows and 40 donkeys are living there. Besides, on remaining land are about 100 dogs suffering from permanent disabilities are living.

Currently Animal Aid has staff of 35 members including 2 veterinary doctors, 6 compounders, veterinary nurses and support staff. They usually work for around 8- 10 hours. However, during emergency they come forward to help without looking any schedule. Many of their workers are from the local aboriginal ethnic group called Bhils who have ancient roots in the Aravali Hills.

They entirely depend on donations from individuals who care about animals. They reach out to foundations, corporations and individuals to request help for rescuing animals. Till now they have received support of Fusion Outsourcing group, R.K.Marble group, Oberoi Group and compassionate animal lovers of Udaipur like Lalit Lohar, Poonam and Praveen along with many locals.

24-Hour Emergency rescue – Animal aid Unlimited has its own rescue team, trained in butterfly-net dog catching. Rescue team has saved more than 25,500 animals since 2002 with the help of local residents and animal lovers. Anyone can call on Animal Aid’s emergency help-line number, to report about stray animal in need. Ambulance is sent immediately to the reported location. Help-line number of Animal Aid is –281-0327. 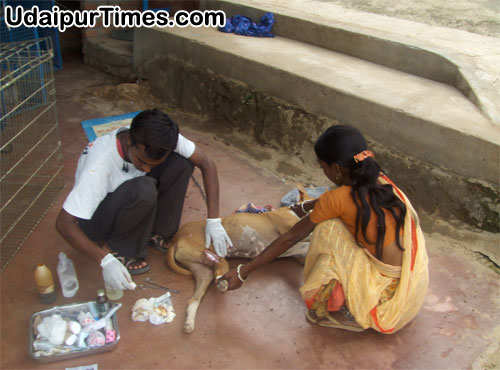 Hospital Care– Hospital facility at Badi is savior of injured, hit or diseased animals. Animal Aid team comprising of Doctors, Compounders and Nurses treat more than 150 animals daily. Common ailments treated at this hospital are skin diseases, wounds, fractures, colic or any other seasonal disease. When animals recovers from his ailment, he is then released to safe localities and incase animal has permanent disability then it resides in hospital only.

As Claire shares, “Once we received a call about a young dog that has fallen into an open well. The well was too deep though with little water, but the poor dog was struggling for its life. Animal Aid’s Rescue Team led by Manohar climbed down into the well, caught the dog in a net, and pulled her into safety. She was cold and very tired, so we brought her to Animal Aid where she recovered. After a few days once she was fine, we brought her back to her home. “This was one of the most complicated cases according to her.

This past monsoon season (2010) was very difficult for Animal Aid because of the influx of cow patients hit by cars on the roads. Before the rainy season, they had 40 cows at its shelter, and now after the rainy season the number has increased to 80. They rescued some cows with all 4 legs crushed under the tires of trucks, or with their faces smashed. It was very sad for them to see the carelessness of so many drivers and animals suffering from the accidents.

Claire dreams of a day when there will be an animal protector in every neighborhood of Udaipur. She plans to work with local teams of volunteers in Udaipur to rescue each animal. She hope of larger and stronger team in coming years working diligently for relieving pain of thousands of suffering animal.