27 thousand SMS were sent to Japanese mobile numbers as a fraud related to mobile cloning fraud was exposed following a complaint filed by a woman in Udaipur- leading to a mobile bill of Rs 2.7 Lakh over one day....read more 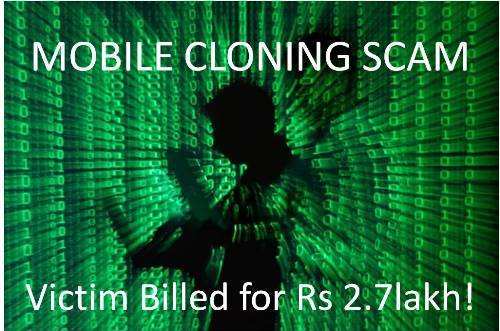 27 thousand SMS were sent to Japanese mobile numbers as a fraud related to mobile cloning fraud was exposed following a complaint filed by a woman in Udaipur.

The mobile cloning scam was unearthed after the victim lodged a complaint, following a bill from her mobile service provider, claiming an amount of Rs 2.7 lakh for 27 thousand international SMS sent from her mobile number.

The matter was directed to the Cyber Cell as this was a case of cyber fraud. Abhishek Dhabai, a cyber expert from Udaipur, said that this was related to mobile number cloning. As per Abhishek, the victim must have, at some point in time, clicked a SMS request for accepting her mobile number. This would have permitted the cloning.

The number cloners created SMS for clients in Japan and over a period of one and a half day, 27 thousand SMS were sent from her number. All the Japanese numbers to which the SMS were sent, appear on the victims mobile. Actually these number would have been in the victims contact list and the cloning would have changed the country prefix code.

All numbers were having the ISD prefix as +81, which is Japan ISD. Earlier, such messages were being sent from Pakistan ISD code of +92. All SMS from the victims number were sent on 11 April 2019.

Cyber experts advise that mobile users should not accept any links, however enticing they may be, as long as they are not sent from genuine contacts.