The Education Department has initiated appointment letters to 10,000 teachers on a contract basis 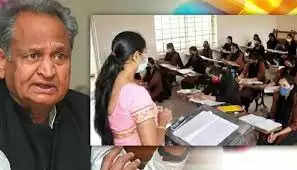 To fill the positions available at government-run English-medium schools, the Rajasthan Education Department has begun employing about 10,000 teachers on a contract basis. The contract is mainly to fill vacancies in Mahatma Gandhi English Medium Schools, which were started in 2019.

This hiring was earlier announced in the fiscal budget by Chief Minister Ashok Gehlot. English language proficiency would be the primary criteria for selection, and teachers from English-medium schools are required. Following the verification of the candidate’s documentation, the interview part will be held. Reservation seats will be chosen in accordance with the government criteria.

However, teachers are claiming that the hiring should be done on the permanent basis for Mahatma Gandhi English medium school and not contractual. Chief Minister Ashok Gehlot noted that many who have previously passed REET and are qualified, saying that the hirings will increase the responsibility of teachers towards students. Notably, these contract employees nevertheless play a major role in the execution of several public welfare and social security-related programmes.