Problems of frontline defenders of the natural heritage were also cited by forest workers, expecting assistance from the department. 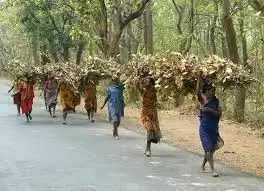 Hundreds of workers employed with the Forest Department directly or indirectly, protested outside the office of the Forest Department in Jaipur on 10 November. Their demands included same salary as of those working in the other forest departments across the country. As additional demand was to equip these workers with weapons for self-defense, which will aid them in defending themselves against dangers from illegal miners, hunters, and other unlawful activities.

“The Chief Wildlife conservator met with the agitating workers and expressed solidarity with their demands. He also informed the workers regarding progress on various demands.” - Union Leader Bhupinder Singh.

Since September 19, 2022, the forest workers have been protesting, and now their protests have reached the state capital. Since forest resources are big business, wildlife crime is rampant and Illicit trafficking of animal body parts, illegal trade in weapons and unauthorized use of forest areas by global networks are not new issues. Problems of frontline defenders of the natural heritage were also cited by forest workers, who also voiced hope from the department.